Despite the volume of cyberattacks doubling in 2017, financial services firms are closing the gap on cyberattacks, having stopped four in five of all breach attempts last year, up from two-thirds in 2016, according to Accenture. However, firms will need to improve their security procedures to heed off increasingly sophisticated attacks powered by new technologies.

The study, “2018 State of Cyber Resilience for Financial Services,” is based on a survey of more than 800 enterprise security practitioners at financial services firms, as well as an investigation of focused cyberattacks having the potential to both penetrate network defenses and cause damage or extract high-value assets and processes from within organizations.

The study notes that financial services firms stopped 81 percent of breach attempts during the timeframe of the most recent study, up from 66 percent during the timeframe for last year’s study. It’s not surprising, then, that more than 80 percent of executives surveyed expressed confidence in their security protocols across all technologies and capabilities.

At the same time, however, while more breach attempts were thwarted, over 40 percent of breaches, on average, went undetected for more than a week, and another 9 percent went undetected for more than one month. This suggests that executives may be overconfident in their security capabilities – given that it’s critical to identify a breach in days, if not hours, to contain the damage.

“Financial services firms are converging to a level of mastery when it comes to the security status quo, including their cyber resilience and response readiness,” said Chris Thompson, global security and resilience lead for financial services, Accenture Security. “But as business technology evolves, so too must cybersecurity. The new technologies that banks and insurers are embracing – including cloud, microservices, application programing interfaces, edge computing and blockchain – will create new security risks, especially as cyberattacks evolve in sophistication.”

Although banks and insurers are increasingly dependent on alliance and business partnerships for growth – with many firms supporting these partnerships through open application programming interfaces – more than one third (37 percent) of executives surveyed said they hold their partners to lower cybersecurity standards than they do their own business. This leaves firms vulnerable to outside security risks.

In addition, financial services firms are also extending their current enterprise infrastructures to the network “edge” and drawing on connected devices – including internet-connected cameras, sensors and smartwatches – forcing security professionals to safeguard more devices that could be used as entry points through which criminals can lurk and observe, and then attack at will.

Yet while sophisticated technologies could pose new security threats, they could also improve cyber resilience, according to the research. Eighty-three percent of financial services executives surveyed said that new technologies – such as artificial intelligence, machine and deep learning, and automation technologies – are essential to ensuring the security of their organizations. However, only two out of five financial services firms are currently investing in new technologies for cyber defense such as AI/machine learning and robotic process automation (43 percent and 38 percent respectively). In addition, just 18 percent of executives surveyed said their firms have significantly increased (defined as at least doubling) their cybersecurity spending over the past three years, and only 30 percent plan to do so in the next three years. 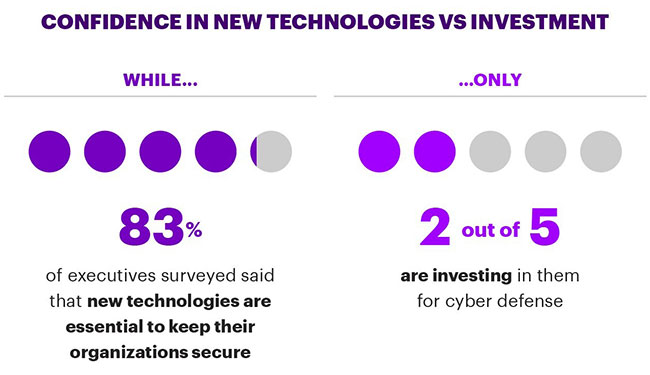 “Cyber risks are moving beyond traditional enterprise boundaries as financial services becomes rapidly digitized and as open banking and third-party data sharing change how business gets done,” Thompson said. “AI, machine learning and robotic process automation can provide a consistent way to monitor for and combat these threats, but only if firms are willing to invest in them.”