Fugue released the results of its Cloud Infrastructure Misconfiguration Report. The survey of more than 300 IT professionals revealed that most enterprises are highly vulnerable to security events caused by cloud misconfiguration. Critical data breaches and system downtime events were among the many reported negative outcomes of misconfiguration.

Misconfiguration can occur for a variety of reasons

“Our goal with this survey was to identify what actually matters to enterprises with regard to cloud misconfiguration, particularly when it comes to security, compliance and their bottom line,” said Phillip Merrick, CEO of Fugue. “While there are many high-profile cases of data breaches due to misconfiguration, there has been little information available regarding the frequency, the causes and the costs enterprises incur in an attempt to manage them and mitigate the risk they bring.”

Concern is high but continuous monitoring is low

Just about every company surveyed registered concern about cloud misconfiguration, with 46 percent saying they were “highly concerned” and 46 percent being “somewhat concerned.” This level of concern has not yet translated into action, with only 28 percent reporting that they continuously monitor misconfiguration alerts.

While 51 percent of teams report a frequency of 50 or more misconfigurations daily, half of the teams surveyed only review alerts and remediate issues on a daily – or even longer – timeframe, leading to dangerously long infrastructure vulnerability periods. Very few believe their Mean Time to Remediation (MTTR) for cloud misconfigurations is where it should be to keep infrastructure secure and compliant.

When asked if their organization had experienced security, compliance or operational issues resulting from a cloud misconfiguration, respondents reported a variety of negative events. Specifically: 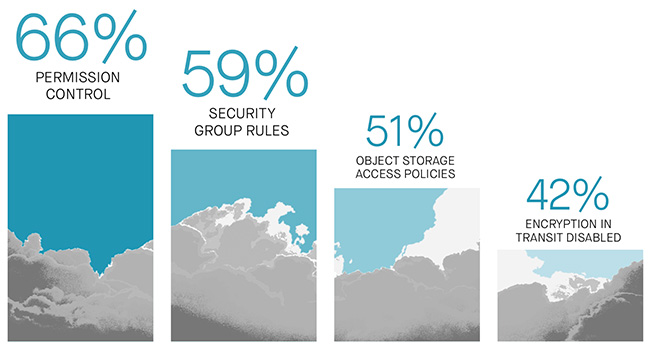 While the risk due to cloud misconfiguration is great, the burden of managing it soaks up valuable time and resources. The survey asked respondents to estimate how much time their teams devoted each week to managing misconfiguration, specifically on tasks such as reviewing alerts, identifying critical issues, remediating, producing reports, and auditing. Just under half reported spending from 50 to 500 (or more) hours of dedicated time.