Kanye West is the worst password offender of 2018, according to Dashlane. When visiting the White House, the famous rapper was sprotted unlocking his iPhone with the passcode “000000”. 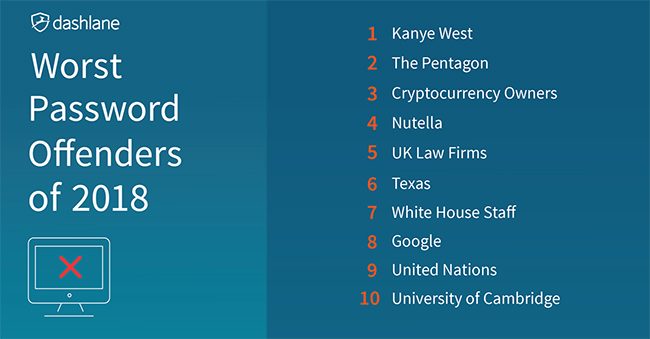 The Pentagon made second place: an audit by the Government Accountability Office revealed easy-to-guess admin passwords and default passwords for multiple weapons systems.

Google has also made the list. “An engineering student from Kerala, India hacked one of their pages and got access to a TV broadcast satellite. The student didn’t even need to guess or hack credentials; he logged in to the Google admin pages on his mobile device in using a blank username and password,” Dashlane explained the inclusion.

It might be that Kanye West temporarily changed his phone password to one that’s easy to remember because he knew that cameras will be around and he didn’t want to worry about them capturing his actual password, but the rest of the offenders have no good excuse for their blunders.

Creating a password that’s long and complex enough to stymie guessing, dictionary and brute-forcing attacks is a problem for many users, especially when they don’t use a password manager to remember it for them.

For the same reason they might reuse the same password for many of their accounts, which is another big no-no as the compromise of one set of credentials then open many doors for attackers.

It should go without saying that password-protecting all accounts is a good idea, but for those who don’t want to use a password manager either for choosing a good passwords or saving it, this particular method for creating strong, difficult-to-crack passwords can come in handy.