The speed of cloud business initiatives is hampering organizations’ ability to secure and manage hybrid environments, with security personnel often not included. The 2019 State of Hybrid Cloud Security survey by FireMon revealed 60% of respondents either agreed or strongly agreed that this was happening in their organizations. 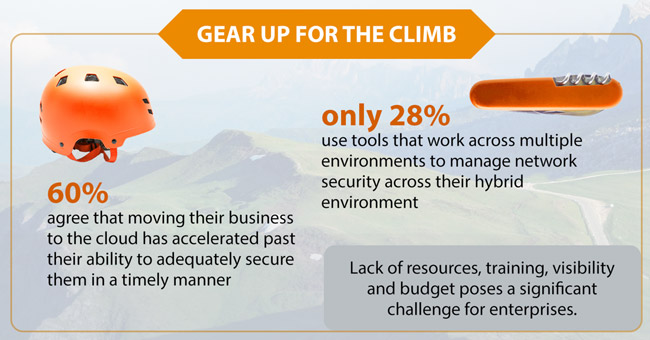 Similarly, the relationship between security and DevOps is inconsistent across organizations, which can impact the consistency of cloud security controls, as more enterprises deploy “as-a-Service” models in the cloud. In some cases, DevOps and security are fully aligned and working well together. In other cases, the relationship is difficult or even dysfunctional:

The survey found that enterprises are inadvertently introducing complexity into their environments by deploying multiple solutions on-premise as well as across multiple private and public clouds.

That complexity is compounded by a lack of integrated tools and training needed to holistically manage and secure hybrid cloud environments. Respondents also cited a lack of integration across tools, and lack of qualified personnel or insufficient training for using the tools, as key roadblocks to achieving cross-environment security management.

Mandate: Do more with less

The transition to hybrid cloud environments has dramatically expanded the enterprise attack surface and, subsequently, the range of assets that must be secured, but security resources are not expanding at that same scale. Budget and staffing are the key resource constraints cited:

“The results of our survey are compelling, but not surprising. In large, complex enterprise environments, budget constraints, lack of clarity around which team is responsible for cloud security, and the absence of standards for managing security across hybrid cloud environments are impairing organizations’ ability to secure their cloud business initiatives,” said FireMon Vice President of Technology Alliances Tim Woods. “This problem will only be solved with a new generation of security technologies and processes that fully integrate with DevOps and provide end-to-end visibility and continuous security and compliance across hybrid environments.”

Woods added that there is clear indication that many companies are no longer aligned to a central security policy or security doctrine that provides the necessary security guardrails across their hybrid environments.

“In the absence of a concise security rule book, where departments are managing their own security controls, they will do so on a best-effort basis,” he said. “You can be guaranteed that this opens the door for increased risk. If decentralized security responsibility is the future for cloud-first strategies, and we believe it is, then we must look for a way to reestablish a global security management strategy that aligns business intent, with compliance intent, with security intent. Security implementations should closely reflect a central security doctrine. Security must be a component of application deployments where both are synchronized to each other.”