Endpoint security tools and agents fail, reliably and predictably, according to the 2019 Global Endpoint Security Trends Report from Absolute.

From there, every additional security tool only amplifies complexity and increases the probability of failure and decay, in turn, exposing the dangers of equating IT security spending with security and risk maturity. The study analyzed data from six million devices and one billion change events over the course of a year.

The endpoint has quickly become valuable real estate for security tools and controls, as traditional network perimeters have given way to cloud-based models in support of the digital workforce. Global security spending is forecast to reach $128 billion by 2020 with endpoint security spend comprising 24 percent of that total, and yet, over 70 percent of breaches originate on the endpoint.

The complexity of endpoint device controls creates a false sense of security among organizations while, in reality, causing security gaps and significant risks due to regular and reliable tool failure. Staggering findings on endpoint security degradation include:

IT and security teams must be able to better understand what is happening on their devices and respond to suspicious events to reduce security failures. Organizations should analyze the tools already in use to identify blind spots or opportunities to strengthen their defenses before adding more security controls. 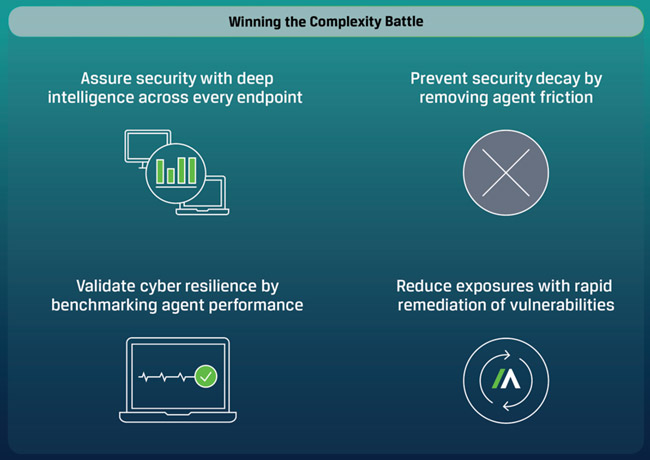 “Evolving security threats have caused enterprises to layer on more and more endpoint controls, increasing complexity, impacting performance, and in some cases the collision of these controls is leaving the endpoint exposed,” said Christy Wyatt, CEO at Absolute. “This complexity of the landscape is making it increasingly difficult for IT and security to have visibility and control. Our research shows the vulnerability that is introduced when critical security controls collide or decay over time. In other words, increased security spending does not increase safety.”

The “2019 Endpoint Security Trends” report analyzes data compiled over the course of a year by Absolute’s security research team. The devices represent data from 12,000 anonymized organizations across North America and Europe, and a third-party research organization was commissioned to conduct in-depth, exploratory interviews with senior executives from Fortune 500 companies to offer context to the findings.