Bot attack sophistication continues to evolve, as advanced attackers learn to adapt their techniques in order to invalidate existing defense tactics, according to Distil Networks.

The report investigates hundreds of billions of bad bot requests from 2018 over thousands of domains to provide deeper insight into the daily automated attacks wreaking havoc on websites, mobile apps and APIs.

“Bot operators and bot defenders are playing an incessant game of cat and mouse, and techniques used today, such as mimicking mouse movements, are more human-like than ever before,” said Tiffany Olson Kleemann, CEO of Distil Networks.

“As sophistication strengthens, so too does the breadth of industries impacted by bad bots. While bot activity on industries like airlines and ticketing are well-documented, no organization – large or small, public or private – is immune. When critical online activity, like voter registration, can be compromised as a result of bad bot activity, it no longer becomes a challenge to tackle tomorrow. Now is the time to understand what bots are capable of and now is the time to act.”

This report underscores the increasing pervasiveness of bad bots, revealing that no industry is safe from malicious bot activity.

This year’s report provides a comprehensive breakdown of some of the top industries impacted by bots and the specific challenges they face. 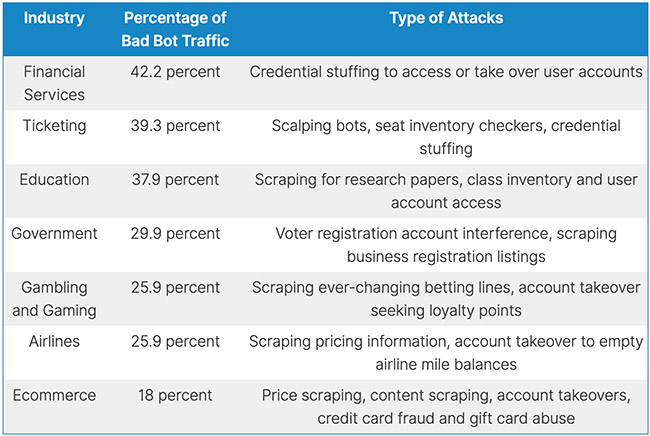