Extortion has become the second most often reported type of cybercrime, but BEC/EAC scams still reign supreme when it comes to monetary loss (or criminals’ earnings), the latest IC3 Internet Crime Report has revealed.

BEC/AEC scams are the most lucrative 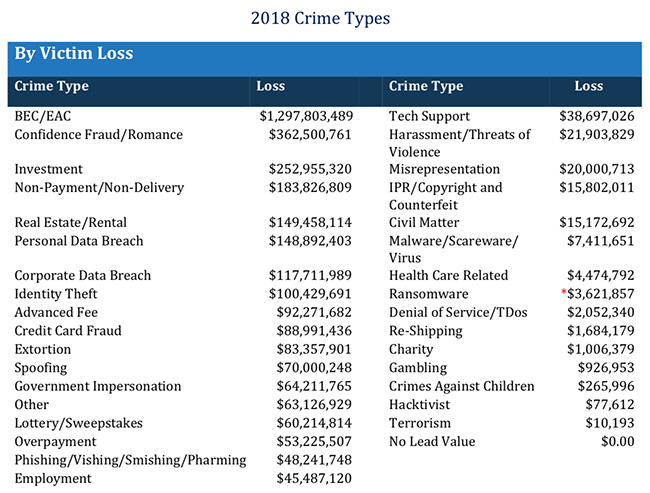 One good news is that IC3’s Recovery Asset Team (RAT), which was established in February 2018 to streamline communication with financial institutions and assist FBI field offices with the recovery of funds for victims who made transfers to domestic accounts under fraudulent pretenses, has been rather successful. In the 1,061 incidents they got involved, they managed to recover 75 percent of the money that would have been lost.

“In September 2018, the IC3 RAT received a complaint filed by a BEC victim located in Colorado. The victim reported that they initiated a fraudulent wire transfer of $56,179.27 after receiving a spoofed email from a lending agent during a real estate transaction. The IC3 RAT, working in coordination with the Denver Field Office, contacted the victim’s bank and worked with the fraud department to freeze the funds. Because of the IC3 RAT’s communication with the bank, the victim was able to recover $54,000.00 of the funds, and purchase their new home,” the FBI shared its successes.

“In August 2018, the IC3 RAT received a complaint filed on behalf of a town located in New Jersey. The town was the victim of a BEC scam in which they transferred over $1M to a fraudulent account. The IC3 RAT, in coordination with the Newark Field Office, worked with the financial institution partners to successfully freeze the funds and return the money to the town.” 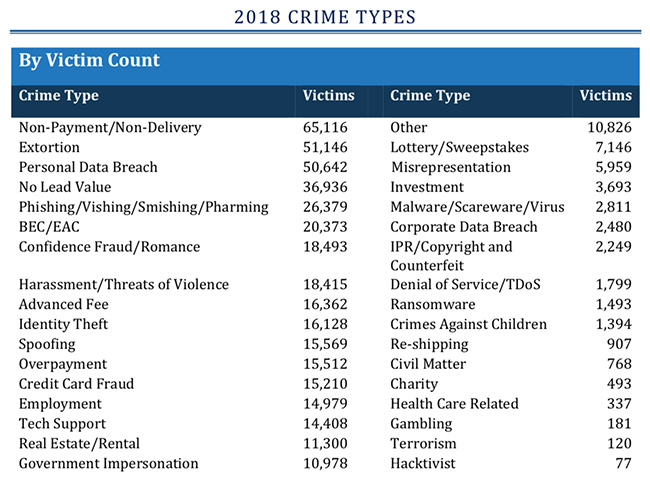 Extortion came in second place, mainly due to a sextortion campaign in which victims received an email threatening to send a pornographic video of them or other compromising information to family, friends, coworkers, or social network contacts if a ransom was not paid. The rest of the crimes that fall under that category are DoS attacks, government impersonation schemes, loan schemes, high-profile data breaches, and hitman schemes (but not ransomware – that gets a category of its own).

The report also shows that: