There is a concerning trend of cross-border crypto payments leaving U.S. exchanges and entering offshore and untraceable wallets, a CipherTrace report reveals.

In the twelve months ending March 2019, crypto transfers from U.S. exchanges to offshore exchanges grew 21 points or 46 percent compared to the same period two years ago. Once these payments reach exchanges and wallets in other parts of the globe, they fall off the radar of U.S. authorities. This highlights a major regulatory blind spot for the U.S.

The Q1 2019 Cryptocurrency Anti-Money Laundering Report also touches on the recent Bitfinex/Tether controversy in which the New York Attorney General’s Office revealed what they allege is a fraud involving the loss of $850 million. Although the story is still developing, CipherTrace notes that the source of the loss was a Panamanian payment processor, Crypto Capital, which QuadrigaCX also used extensively.

Further documented in the report are details of countries like Iran leveraging cryptocurrency to circumvent global monetary sanctions. In November 2018, SWIFT, the Society for Worldwide Interbank Financial Telecommunication banned some Iranian banks from access to its widely used cross-border payment services. Consequently, this January, Iran launched its own sovereign cryptocurrency in what appears to be a clever sanction sidestep.

Exchange thefts and exit scams totaled more than $356 million in Q1 2019. All of that money will need to be washed, and if the trend continues, we could see a near-billion-dollar money laundering problem. New and innovative money laundering techniques have kept regulators on their toes.

Now, a new wave of privacy coins threatens to further exacerbate the issue. In preparation for a potential crypto resurgence, regulators around the world are quickly deploying regulatory guidelines, adopting blockchain forensic programs and demanding AML and CTF compliance. 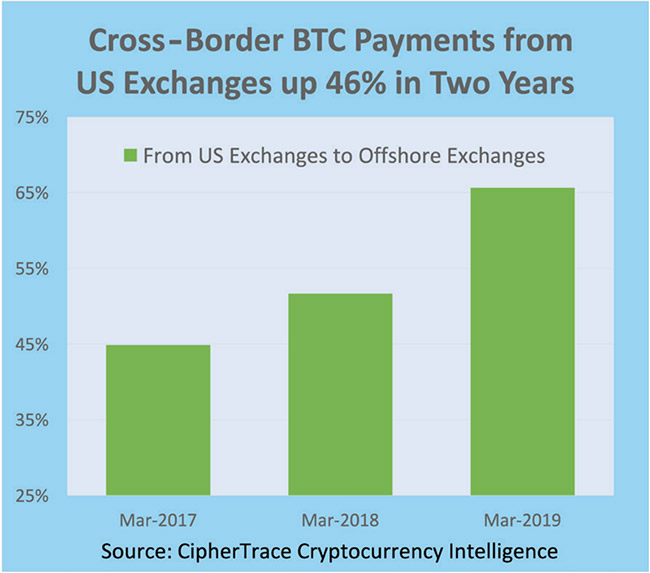 “Although this report punctuates some of the negative occurrences within the crypto ecosystem, it is important to view these illuminations as markers for improvement,” said Dave Jevans, CipherTrace CEO.

“This is the wake-up call crypto needs. Cryptocurrency is maturing, and that means having a few growing pains. Once we identify problems, we can find solutions. Crypto currency projects must grow up before they can move forward.”