There is a steady increase in attacks and changes in attack methods that target weaknesses in encryption, workload configuration, limited visibility into vulnerabilities and outdated and unsupported operating systems, according to a research by Alert Logic. 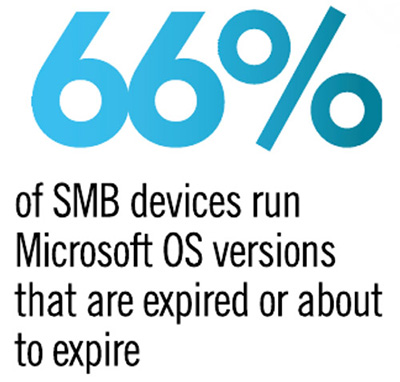 The research discovered 66% of SMB devices run Microsoft OS versions that have expired or will expire by January 2020, the majority of which are over 10 years old.

In support of the research, Alert Logic’s Threat Intelligence team analyzed more than 1.3 petabytes of data, 10.2 trillion log messages, 2.8 billion intrusion detection events, and 8.2 million verified security incidents across Alert Logic’s customer base of more than 4,000 organizations of all sizes, from SMBs to large enterprises.

“The continued lack of skilled cybersecurity professionals affects organizations of all sizes, and small and midsize businesses are at greater disadvantage because they can’t scale like large organizations can,” said Onkar Birk, Senior Vice President of Product Strategy and Engineering, Alert Logic.

“These organizations will greatly benefit from partnering with providers who can augment their limited teams with threat intelligence and experts to be more secure and compliant.”

The report details nine top takeaways based on Alert Logic’s analysis over a six-month period. Some of the key findings are as follows: