It took a lot of testing and tweaking, but Mozilla’s Firefox browser is finally being delivered with Enhanced Tracking Protection and a web-based cryptomining blocking feature on by default.

“Enhanced Tracking Protection works behind-the-scenes to keep a company from forming a profile of you based on their tracking of your browsing behavior across websites — often without your knowledge or consent. Those profiles and the information they contain may then be sold and used for purposes you never knew or intended,” Marissa Wood, Firefox’s vice president of product management, explained.

Enhanced Tracking Protection (ETP) has been automatically set on by default in June, but only for users who downloaded and installed Firefox for the first time.

Starting with Firefox version 69.0, ETP will be turned on by default for all users worldwide as part of the “Standard” Content Blocking setting in the Firefox browser. (Until now, the “Standard”, default mode blocked only known trackers, and only in Private Windows.) 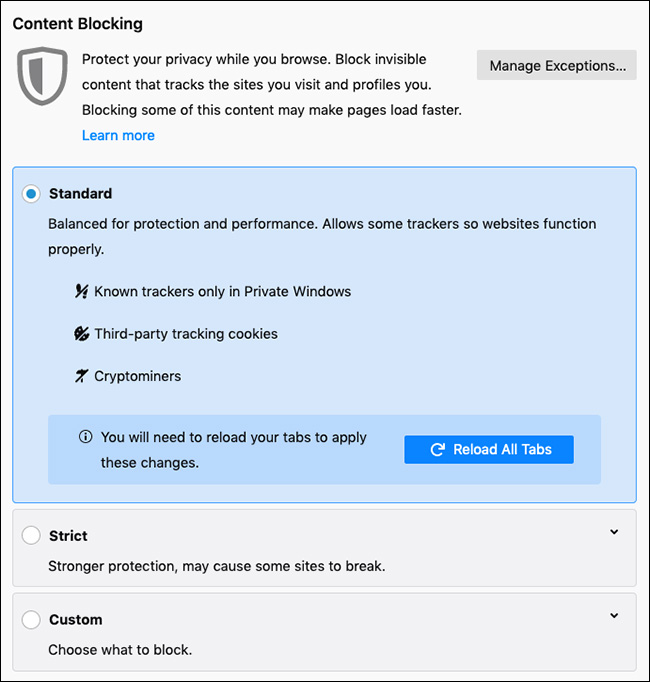 From now on, the “Standard” mode will also block web-based cryptominers, but the option to block domains that host scripts harvesting a snapshot of users’ computer’s configuration (aka “fingerprinting” scripts) will be given only to those that opt for the “Strict” Content Blocking mode.

“In a future release, we plan to turn fingerprinting protections on by default,” Mozilla added.

Firefox’s blocking features work by using a continually updated “blacklists” of offending domains. The lists are compiled by Disconnect, a US-based software maker known for its content-filtering, tracker-blocking browser plugins.

Users can see which companies Firefox blocks by clicking on the blue shield icon that pops up in the address bar next to the site URL, and can turn off blocking for specific sites.