Most banks plan to integrate their fraud and financial crime compliance systems and activities in response to new criminal threats and punishing fines, with the U.K. leading the pack, according to a survey by Ovum, on behalf of FICO. 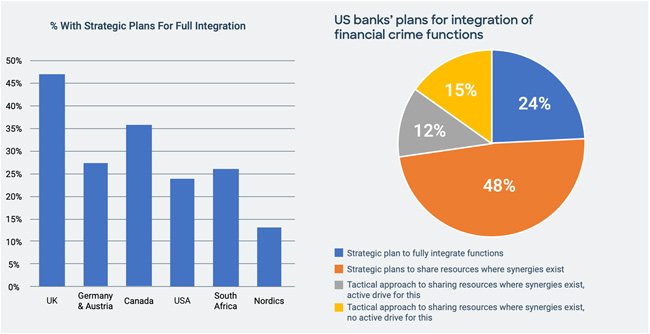 Responses show that U.S. systems are less integrated than Canada’s – only 25 percent of U.S. banks have a common reporting line for both fraud and compliance, versus 60 percent for Canada.

The survey also found that 72% of U.S. banks surveyed have strategic plans for further integration. Worldwide, 71% of banks across the regions surveyed have integration strategies, to either fully integrate functions or share resources where synergies exist with the U.K. leading the way, followed closely by the U.S.

These goals are driven by considerations both financial and strategic: Since the 2008 financial crisis, regulatory fines for the global banking industry for compliance breaches related to compliance or sanctions failures now total more than $28 billion (all figures USD), with some single fines as high as $8.9 billion. However, this regulatory ‘stick’ is only one driver for banks to tackle financial crime — banks also wish to protect their customers and themselves.

“Banks are asking a fundamental question: Is the current approach to tackling financial crime sustainable or should they seek a more integrated approach between fraud and anti-money laundering (AML) compliance?” said TJ Horan, vice president of fraud solutions at FICO.

“U.S. banks are all too familiar with the challenges presented by a disconnected approach, but struggle to manage high workload volumes and ensure detection rates are high.”

Though the world’s banks appear united in their pursuit of integration, FICO’s survey found significant differences between approaches among the ten countries studied.

U.S. banks reported lower levels of integration than their U.K. counterparts in six out of seven areas. Even at their highest levels of integration, data and investigation systems, just over half of U.K. banks said their fraud and financial crime compliance systems were very integrated.

Worldwide, it’s clear the banking industry has only started the process of bringing these functions closer together.

Most respondents received high marks when it came to strategic planning, with most having strategic plans to either fully integrate their functions or share resources where synergies exist.

“Convergence is a hot trend in the fraud and financial crime compliance space,” Horan said. “Overall, our survey shows that banks are moving in this direction, though the U.S. is further behind than most countries surveyed.”

Ovum surveyed over 100 retail banks on their priorities, challenges, and plans for financial crime, looking to assess the maturity of the sector in tackling financial crime, and ambitions towards integration. In addition to the U.S., Canada, and the U.K., respondents came from South Africa, Scandinavia, Germany, and Austria.