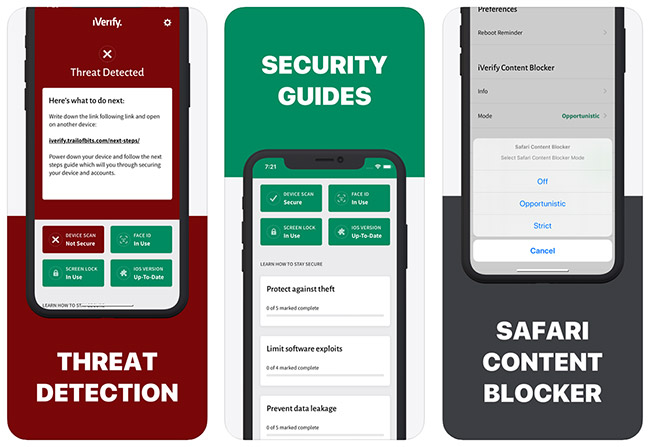 iVerify makes it easy for users to manage the security of their accounts and online presence with simple instructional guides. Crucially, it also detects security anomalies—hacks, or jailbreaks—on iPhones and iPads.

“One of the downsides of a secure (read: locked down) device such as an iPhone, is that it’s difficult for users to tell if it’s been compromised. Stoked that Trail of Bits (who also support #OBTS), have released an app that strives to address this,” said Patrick Wardle, Principal Security Researcher at Jamf.

Just one day after its release on the App Store, iVerify made #1 in paid utility apps and #4 in paid apps, overall. It’s “one of the first ever apps that promises to catch iPhone hacks to be approved to be on the official App Store,” as VICE Motherboard reported.

“If privacy matters, it should matter to the phone your life is on,” says Apple in their recent ads about Privacy on the iPhone—but many of the security features highlighted are opt-in, and users often don’t know when or how to activate them.

To keep data confidential and limit data sharing, there are dozens of settings to change, and the trade-offs between enabling and disabling a feature aren’t always clear. iVerify makes these trade-offs straightforward with guides that show how to adjust settings based on privacy and security needs.

“It’s great to see Dan and his excellent team apply their high-end skills to the consumer space. The options available to end-users right now are pretty sparse compared to enterprises. I’m giving it a spin!” said Alex Stamos, Director at Stanford Internet Observatory.

iVerify also detects security anomalies on iPhones and iPads. It’s normally almost impossible to tell if your iPhone has been hacked, but iVerify gives users a heads-up: It periodically scans for anomalies that might indicate a device has been compromised, creates a detailed report on what was detected, and provides actionable advice on how to proceed.