Despite higher levels of investment in advanced cybersecurity technologies over the past three years, less than one-fifth of organizations are effectively stopping cyberattacks and finding and fixing breaches fast enough to lower the impact, according to a report from Accenture. 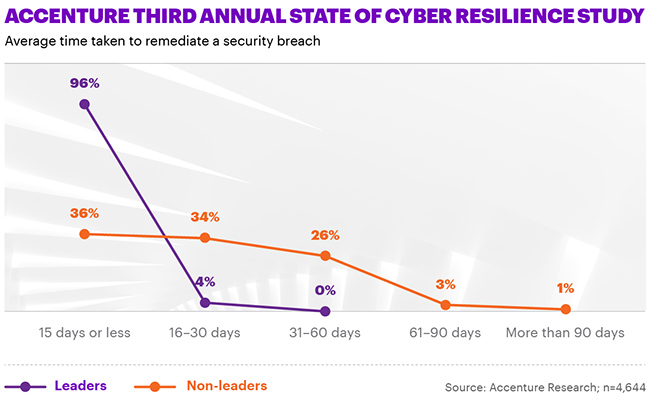 Based on a survey of more than 4,600 enterprise security practitioners around the globe, the study explores the extent to which organizations prioritize security, the effectiveness of current security efforts, and the impact of new security-related investments.

Many are not cyber resilient

From detailed modeling of cybersecurity performance, the study identified a group of elite “leaders” — 17% of the research sample — that achieve significantly better results from their cybersecurity technology investments than other organizations.

Leaders were characterized as among the highest performers in at least three of the following four categories: stop more attacks, find breaches faster, fix breaches faster and reduce breach impact. The study identified a second group, comprising 74% of the respondents, as “non-leaders” — average performers in terms of cyber resilience but far from being laggards.

“Our analysis identifies a group of standout organizations that appear to have cracked the code of cybersecurity when it comes to best practices,” said Kelly Bissell, who leads Accenture Security globally. “Leaders in our survey are far quicker at detecting a breach, mobilizing their response, minimizing the damage and getting operations back to normal.”

For instance, leaders were four times more likely than non-leaders to detect a breach in less than one day (88% vs. 22%). And when defenses fail, 96% of the leaders fixed breaches in 15 days or less, on average, whereas 64% of non-leaders took 16 days or longer to remediate a breach — with nearly half of those taking more than a month.

The differences between leaders and non-leaders

Among the key differences in cybersecurity practices between leaders and non-leaders, the report identified:

The study also found that 83% believe that organizations need to think beyond securing just their own enterprises and take better steps to secure their vendor ecosystems in order to become cyber resilient. 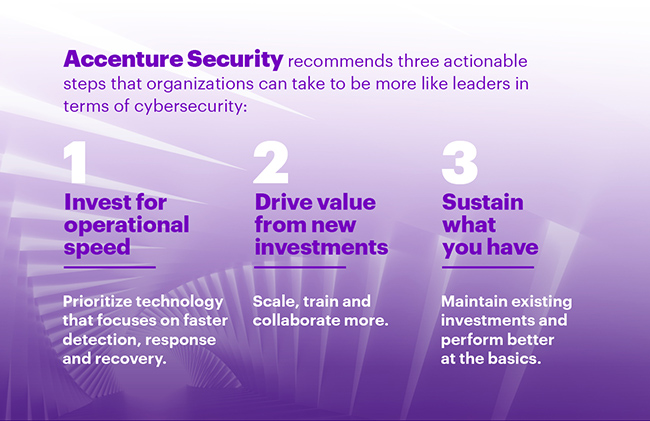 Additionally, while cybersecurity programs designed to protect data and other key assets are only actively protecting about 60% of an organization’s business ecosystem, which includes vendors and other business partners, 40% of breaches come through this route.

“The sizable number of vendor relationships that most organizations have poses a significant challenge to their ability to monitor that business ecosystem,” Bissell said. “Yet, given the large percentage of breaches that originate in an organization’s supply chain, companies need to ensure that their cyber defenses stretch beyond their own walls.”