Despite ongoing economic uncertainty amidst a global pandemic, many dealmakers remain optimistic about the outlook for the year ahead as they increasingly pursue alternative merger and acquisition (M&A) methods to navigate the crisis and pursue new disruptive business growth strategies. 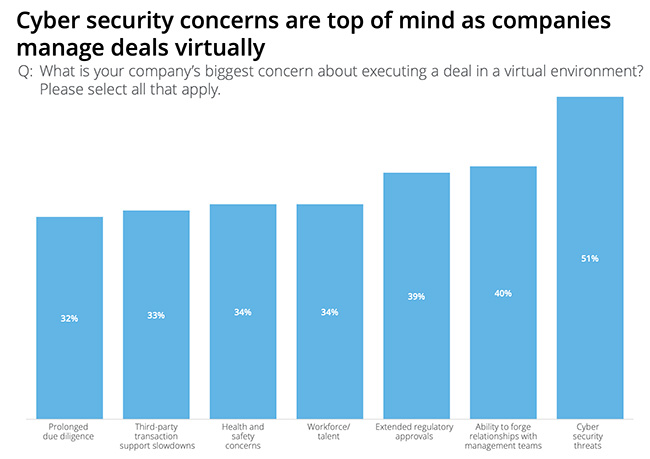 According to a Deloitte survey of 1,000 U.S. corporate M&A executives and private equity firm professionals, 61% of survey respondents expect U.S. M&A activity to return to pre-COVID-19 levels within the next 12 months.

Soon after the WHO declared COVID-19 a pandemic on March 11, deal activity in the U.S. plunged — most notably during April and May.

Responding M&A executives say they tentatively paused (92%) or abandoned (78%) at least one transaction as a result of the pandemic outbreak. However, since March 2020, possibly aiming to take advantage of pandemic-driven business disruptions, 60% say their organizations have been more focused on pursuing new deals.

“We expect both traditional and alternative M&A to be an important lever for dealmakers as businesses recover and thrive in a post-COVID economy.”

Alternative dealmaking on the rise

For many, alternative deals are quickly outpacing traditional M&A activity as the search for value intensifies in a low-growth environment.

When asked which type of deals their organizations are most interested in pursuing, responding corporate M&A executives’ top choice was alternatives to traditional M&A, including alliances, joint ventures, and Special Purpose Acquisition Companies (45%) — ranking higher than acquisitions (35%).

“As businesses prepare for a post-COVID world, including fundamentally reshaped economies and societies, the dealmaking environment will also materially change,” said Mark Purowitz, principal, Deloitte Consulting LLP, with Deloitte’s mergers and acquisitions consulting practice, and leader of the firm’s Future of M&A initiative.

“Companies were starting to expand their definition of M&A to include partnerships, alliances, joint ventures and other alternative investments that create intrinsic and long-lasting value, but COVID-19 has accelerated dealmakers’ needs to create more optionality for their organizations’ internal and external ecosystems.”

87% of M&A professionals surveyed report that their organizations were able to effectively manage a deal in a purely virtual environment, so much so that 55% anticipate that virtual dealmaking will be the preferred platform even after the pandemic is over.

However, virtual dealmaking does not remain without its own challenges. Fifty-one percent noted that cybersecurity threats are their organizations’ biggest concern around executing deals virtually.

“CISOs understand how a data breach can negatively impact the valuation and the underlying deal structure itself. Leaving cyber out of that risk picture may lead to not only brand and reputational risk, but also significant and unaccounted remediation costs.”

Other virtual dealmaking concerns included the ability to forge relationships with management teams (40%) and extended regulatory approvals (39%). When it comes to effectively managing the integration phase in a virtual environment, technology integration (16%) and legal entity alignment or simplification (16%) are surveyed M&A executives’ largest and most prevalent hurdles.

“It may be too early to assess the long-term implications of virtual dealmaking as many of the deals currently in progress now are resulting from management relationships that were formed pre-COVID. We also expect integration in a virtual setting will become much more complex a few months from now,” said Thomson. 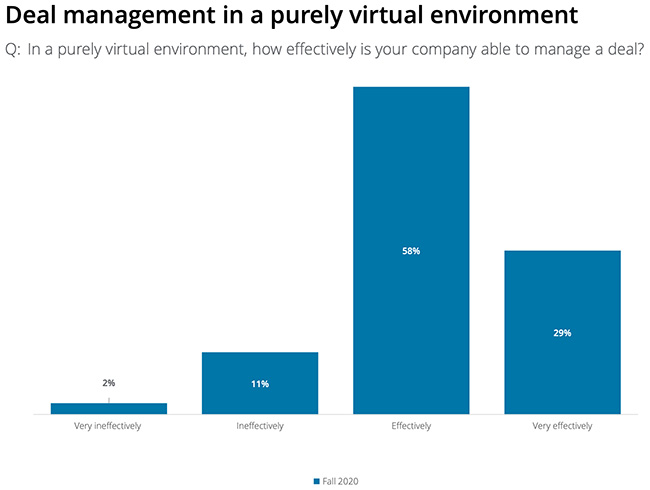 “Culture and compatibility issues should be given greater attention on the diligence side, as they pose major downstream integration implications.”

Interest in foreign M&A targets declined in 2020 as corporate executives reported a significant shift in their approach to international dealmaking, with 17% reporting no plans to execute cross-border deals in the current economic environment, an 8 percentage point increase from 2019.

In addition, 57% of M&A executives say less than half of their current transactions involve acquiring targets operating primarily in foreign markets.