Like most American businesses, middle market companies have been forced to rapidly implement a variety of work-from-home strategies to sustain productivity and keep employees safe during the COVID-19 pandemic. This shift, in most cases, was conducted with little chance for appropriate planning and due diligence. 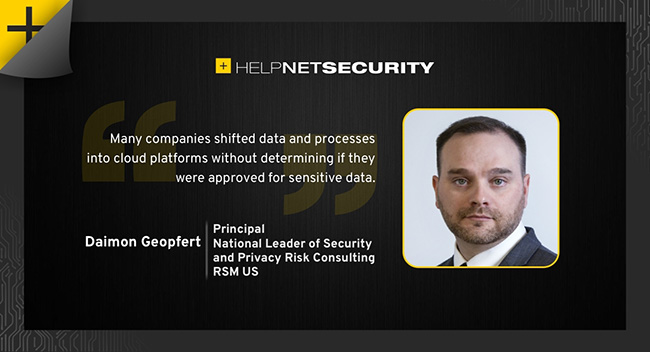 This is especially true in regard to the security and compliance of remote work solutions, such as new cloud platforms, remote access products and outsourced third parties. Many middle market companies lacked the resources of their larger counterparts to diagnose and address potential gaps in a timely manner, and the pressure to make these changes to continue operations meant that many of these shortcomings were not even considered at the time.

Perhaps more important than the potential security risks that could come with these hastily deployed solutions is the risk that an organization could realize later that the mechanisms they deployed turned out to lack controls required by a variety of regulatory and industry standards.

Take medical and financial records as an example. In a normal scenario, an organization typically walls off systems that touch such sensitive data, creating a segmented environment where few systems or people can interact with that data, and even then, only under tightly controlled conditions. However, when many companies set up work-from-home solutions, they quickly realized that their new environment did not work with the legacy architecture protecting the data. Employees could not effectively do their jobs, so snap decisions were made to allow the business to operate.

In this situation, many companies took actions, such as removing segmentation to allow the data and systems to be accessible by remote workers, which unfortunately exposed sensitive information directly to the main corporate environment. Many companies also shifted data and processes into cloud platforms without determining if they were approved for sensitive data. In the end, these workarounds may have violated any number of regulatory, industry or contractual obligations.

In the vast majority of these circumstances, there is no evidence of any type of security event or a data breach, and the control issues have been identified and addressed. However, companies are now in a position where they know that, for a period of time (as short as a few days or months in some cases), they were technically non-compliant.

Many middle market companies now face a critical dilemma: as the time comes to perform audits or self-attestation reports, do they report these potential lapses to regulatory or industry entities, such as the SEC, PCI Council, HHS, DoD or FINRA, knowing that could ultimately result in significant reputational and financial damages and, if so, to what extent?

A temporary regulatory grace period is needed, and soon

The decision is a pivotal one for a significant number of middle market companies. To date, regulators have not been showing much sympathy during the pandemic, and a large segment of the middle market finds itself in a no man’s land. If they had not made these decisions to continue business operations as best they could, they would have gone out of business. But now, if they do report these violations, the related fines and penalties will likely result in the same fate.

A solution for this crucial predicament is a potential temporary regulatory grace period. Regulatory bodies or lawmakers could establish a window of opportunity for organizations to self-identify the type and duration of their non-compliance, what investigations were done to determine that no harm came to pass, and what steps were, or will be, taken to address the issue.

Currently, the concept of a regulatory grace period is slowly gaining traction in Washington, but time is of the essence. Middle market companies are quickly approaching the time when they will have to determine just what to disclose during these upcoming attestation periods.

Companies understand that mistakes were made, but those issues would not have arisen under normal circumstances. The COVID-19 pandemic is an unprecedented event that companies could have never planned for. Business operations and personal safety initially consumed management’s thought processes as companies scrambled to keep the lights on.

Ultimately, many companies made the right decisions from a business perspective to keep people working and avoid suffering a data breach, even in a heightened environment of data security risks. Any grace period would not absolve the organization of responsibility for any regulatory exposures. For example, if a weakness has not already been identified and addressed, the company could still be subject to fines and other penalties at the conclusion of the amnesty window.

Even a proposed grace period would not mean that middle market companies would be completely out of the woods. Companies often must comply with a host of non-regulatory obligations, and while a grace period may provide some relief from government regulatory agencies, it would not solve similar challenges that may arise related to industry regulations, such as PCI or lapses in third-party agreements.

But a grace period from legislators could be a significant positive first step and potentially represent a blueprint for other bodies. Without some kind of lifeline, many middle market companies that disclose their temporary compliance gaps would likely be unable to continue operations and a significant amount of jobs subsequently may be lost.