Connected devices are becoming more ingrained in our daily lives and the burgeoning IoT market is expected to grow to 41.6 billion devices by 2025. As a result of this rapid growth and adoption at the consumer and commercial level, hackers are infiltrating these devices and mounting destructive hacks that put sensitive information and even lives at risk. 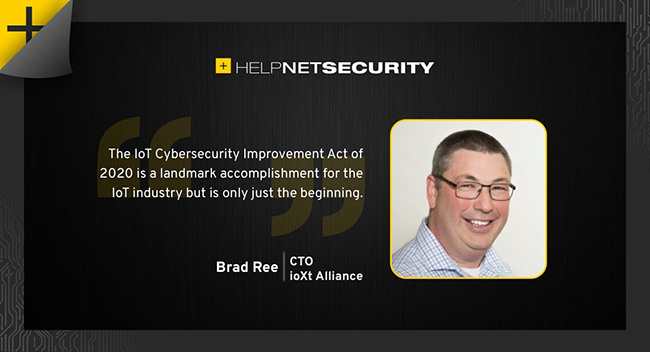 These attacks and potential dangers have kept security at top of mind for manufacturers, technology companies and government organizations, which ultimately led to the U.S. House of Representatives passing the IoT Cybersecurity Improvement Act of 2020.

The bill focuses on increasing the security of federal devices with standards provided by the National Institute of Standards and Technology (NIST), which will cover devices from development to the final product. The bill also requires Homeland Security to review and revisit the legislation up to every five years and revise it as necessary, which will keep it up to date with the latest innovative tech and new standards that might come along with it.

Although it is a step in the right direction to tighten security for federal devices, it only scratches the surface of what the IoT industry needs as a whole. However, as this bill is the first of its kind to be passed by the House, we need to consider how it will help shape the future of IoT security:

Better transparency throughout the device lifecycle

With a constant focus on innovation in the IoT industry, oftentimes security is overlooked in order to rush a product onto shelves. By the time devices are ready to be purchased, important details like vulnerabilities may not have been disclosed throughout the supply chain, which could expose and exploit sensitive data. To date, many companies have been hesitant to publish these weak spots in their device security in order to keep it under wraps and their competition and hackers at bay.

However, now the bill mandates contractors and subcontractors involved in developing and selling IoT products to the government to have a program in place to report the vulnerabilities and subsequent resolutions. This is key to increasing end-user transparency on devices and will better inform the government on risks found in the supply chain, so they can update guidelines in the bill as needed.

For the future of securing connected devices, multiple stakeholders throughout the supply chain need to be held accountable for better visibility and security to guarantee adequate protection for end-users.

Public-private partnerships on the rise

Per this bill, for the development of the security guidelines, the government will need to consult with cybersecurity experts to align on industry standards and best practices for better IoT device protection.

Working with industry-led organizations can provide accurate insight and allow the government to see current loopholes to create standards for real-world application. Encouraging these public-private partnerships is essential to advancing security in a more holistic way and will ensure guidelines and standards aren’t created in a silo.

The current bill only focuses on securing devices on a federal level, but with the crossover from manufacturers and technology companies working in both the commercial/government and consumer space, naturally this bill will infiltrate the consumer device market too. It’s not practical for a manufacturer to follow two separate guidelines for both categories of products, so those standards in place for government contracted devices will likely be applied to all devices on the assembly line.

As the focus will shift to consumer safety after this bill, the challenge for manufacturers to eventually test products against two bills – one with federal and one with consumer standards – has been raised in the industry. The only way to remedy the issue is if there are global, adoptable and scalable standards across all industries to streamline security and provide appropriate protection for all device categories.

Universal standards – Are we there yet?

While this bill is a great start for the IoT industry and may serve as the catalyst for future IoT bills, there is still some room for improvement for the future of connected device security. In its current form, the bill does not explicitly define the guidelines for security, which can be frustrating and confusing for IoT device stakeholders who need to comply with them. With multiple government organizations and industry-led programs creating their own set of standards, the only way to truly propel this initiative forward is to harmonize and clearly define standards for universal adoption.

While the IoT bill signals momentum from the US government to prioritize IoT security, an international effort needs to be in place for establishing global standards and protecting connected devices must be made, as the IoT knows no boundaries. Syncing these standards and enforcing them through trusted certification programs will hold manufacturers and tech companies accountable for security and provide transparency for all end-users on a global scale.

The IoT Cybersecurity Improvement Act of 2020 is a landmark accomplishment for the IoT industry but is only just the beginning. As the world grows more integrated through connected devices, security standards will need to evolve to keep up with the digital transformation occurring in nearly every industry.

Due to security remaining a key concern for device manufacturers, tech companies, consumers and government organizations, the need for global standards remains in focus and will likely need an act of Congress to make them a priority.