Businesses around the globe are facing challenges as they try to protect data stored in complex hybrid multi-cloud environments, from the growing threat of ransomware, according to a Veritas Technologies survey. 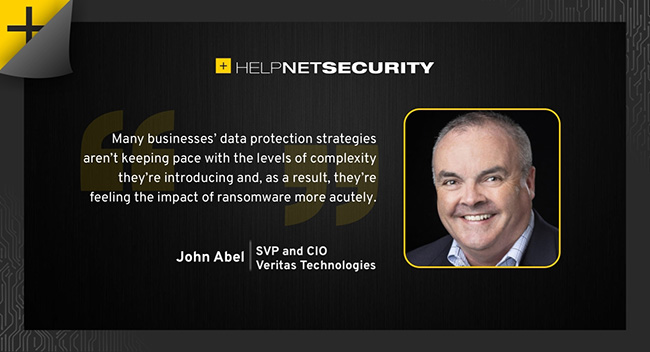 Only 36% of respondents said their security has kept pace with their IT complexity, underscoring the need for greater use of data protection solutions that can protect against ransomware across the entirety of increasingly heterogenous environments.

Typically, if businesses fall foul to ransomware and are not able to restore their data from a backup copy of their files, they may look to pay the hackers responsible for the attack to return their information.

The research showed companies with greater complexity in their multi-cloud infrastructure were more likely to make these payments. The mean number of clouds deployed by those organizations who paid a ransom in full was 14.06. This dropped to 12.61 for those who paid only part of the ransom and went as low as 7.22 for businesses who didn’t pay at all.

In fact, only 20% of businesses with fewer than five clouds paid a ransom in full, 44% for those with more than 20. This compares with 57% of the under-fives paying nothing to their hackers and just 17% of the over-20s.

Complexity in cloud architectures was also shown to have a significant impact on a business’s ability to recover following a ransomware attack. While 43% of those businesses with fewer than five cloud providers in their infrastructure saw their business operations disrupted by less than one day, only 18% of those with more than 20 were as fast to return to normal.

Furthermore, according to the findings of the research, greater complexity in an organization’s cloud infrastructure, also made it slightly less likely that they would ever be able to restore their data in the event of a ransomware attack.

While 44% of businesses with fewer than five cloud providers were able to restore 90% or more of their data, just 40% of enterprises building their infrastructure on more than 20 cloud services were able to say the same.

John Abel, SVP and CIO at Veritas said: “The benefits of hybrid multi-cloud are increasingly being recognised in businesses around the world. In order to drive the best experience, at the best price, organizations are choosing best-of-breed cloud solutions in their production environments, and the average company today is now using nearly 12 different cloud providers to drive their digital transformation.

“However, our research shows many businesses’ data protection strategies aren’t keeping pace with the levels of complexity they’re introducing and, as a result, they’re feeling the impact of ransomware more acutely.

“In order to insulate themselves from the financial and reputational damage of ransomware, organizations need to look to data protection solutions that can span their increasingly heterogenous infrastructures, no matter how complex they may be.”

The research revealed that many businesses are aware of the challenge they face, with just 36% of respondents believing their security had kept pace with the complexity in their infrastructure.

The top concern as a result of this complexity, as stated by businesses, was the increased risk of external attack, cited by 37% of all participants in the research.

Abel continued: “We’ve heard from our customers that, as part of their response to COVID, they rapidly accelerated their journey to the cloud. Many organizations needed to empower homeworking across a wider portfolio of applications than ever before and, with limited access to their on-premise IT infrastructure, turned to cloud deployments to meet their needs.

“We’re seeing a lag between the high-velocity expansion of the threat surface that comes with increased multi-cloud adoption, and the deployment of data protection solutions needed to secure them. Our research shows some businesses are investing to close that resiliency gap – but unless this is done at greater speed, companies will remain vulnerable.”

46% of businesses shared they had increased their budgets for security since the advent of the COVID-19 pandemic. There was a correlation between this elevated level of investment and the ability to restore data in the wake of an attack: 47% of those spending more since the Coronavirus outbreak were able to restore 90% or more of their data, compared with just 36% of those spending less.

The results suggest there is more to be done though, with the average business being able to restore only 80% of its data.

While the research indicates organizations need to more comprehensively protect data in their complex cloud infrastructures, the survey also highlighted the need to get the basics of data protection right too.

Forty-nine percent of those with three or more copies of their files were able to restore 90% or more of their information, compared with just 37% of those with only two.

The three most common data protection tools to have been deployed amongst respondents who had avoided paying ransoms were: anti-virus, backup and security monitoring, in that order.

The safest countries to be in to avoid ransomware attacks, the research revealed, were Poland and Hungary. Just 24% of businesses in Poland had been on the receiving end of a ransomware attack, and the average company in Hungary had only experienced 0.52 attacks ever.

The highest incident of attack was in India, where 77% of businesses had succumbed to ransomware, and the average organization had been hit by 5.27 attacks.