The risk of identity fraud has increased significantly with attacks occurring more frequently since the start of the pandemic, Onfido reveals. 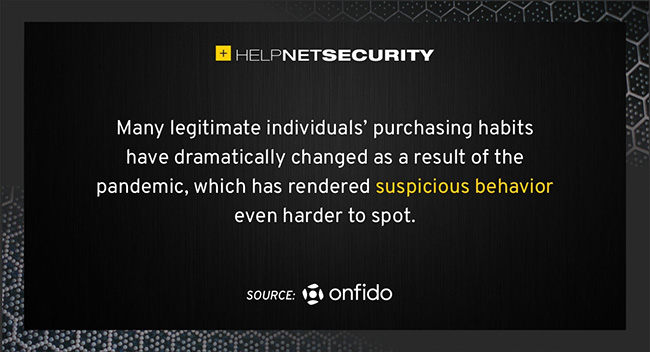 Over the past 12 months, the average identity document (ID) fraud rate increased by 41% over the previous year as first-time fraudsters appear to be more prevalent, likely due to increased economic hardships during the pandemic.

The average ID fraud rate reached 5.8% – up from 4.1% the previous year (Oct 2018-2019). The increase is largely reflective of the significant spike in fraud since April 2020 when most of the world was entering the first phase of lockdown, as rates remained stable during the first few months of the year.

INTERPOL contributed to the report noting: “Identity document fraud can take different forms, and both false and genuine documents are used to perpetrate a variety of frauds. The fraudulent use of identity and travel documents therefore presents a threat to the security of countries and their citizens, the economy, and global commerce, and is often linked to organized crime, money laundering and terrorism.”

Fraudulent activity peaked in July and August. But with large parts of Europe encountering a ‘second wave’ and re-entering lockdown, coupled with the spike in online activity for the holiday shopping season, fraud rates will start to climb again in the last few months of the year.

The explosion in ID fraud since the beginning of the pandemic has also given rise to a number of new trends for identity fraud.

Fraudulent activity tends to increase during crises as the three primary factors of fraud are intensified: opportunity, rationalization and pressure. This year, the proportion of unsophisticated fraud grew 23% year-over-year, from 57% in 2019’s Fraud Report to 70%.

Given that the amount of sophisticated attacks stayed the same, at under 1%, this suggests that first-time fraudsters might be trying unsophisticated fraud attacks as a new side hustle outside of their regular work to shield them from the economic downturn.

In 2019, Onfido identified that many fraudsters treated it as a 9-5 job: attacks were higher on weekdays and dropped off over the weekends. This year, that has changed. Now, the suspected fraud rate is staying almost level over all seven days of the week.

Professional fraudsters appear to be working overtime with the activity level at these times further bolstered by the growing ‘talent pool’ of non-professionals.

In 2020, a growing use of 2D and even 3D masks to attack both selfie and video verification products was identified.

More troubling still, there has been an increase in replay attacks, where fraudsters attempt to circumvent cameras entirely and upload stolen videos or deep fakes. This was the first year Onfido saw deep fakes used; a tactic likely to quickly grow in popularity as they are cheaper to create than good 3D masks.

Many legitimate individuals’ purchasing habits have dramatically changed as a result of the pandemic, which has rendered suspicious behavior even harder to spot.

With so much volatility in the market, businesses across all industries need to be extra-vigilant and recalibrate their friendly friction threshold; the difficult balance between fraud risk and customer experience.

Michael Van Gestel, Head of Global Document Fraud at Onfido, comments: “There is no question that COVID-19 has catalyzed massive growth in identity fraud attempts, with industries like financial services disproportionately affected. And with sensitive and personally identifiable information easily gleaned from social media and available for sale on the dark web, database checks are just not fit for purpose in this escalated fraud environment.

“Baking in more sophisticated identity verification methods, such as document and biometric authentication, will ensure that no matter how fraudsters try to capitalize on the changing situation, businesses can significantly lower the risk of fraud to their organization and customers.”