New account fraud based on ID verification declined 23.2% worldwide YOY in 2020, compared to 2019 results, according to Jumio. 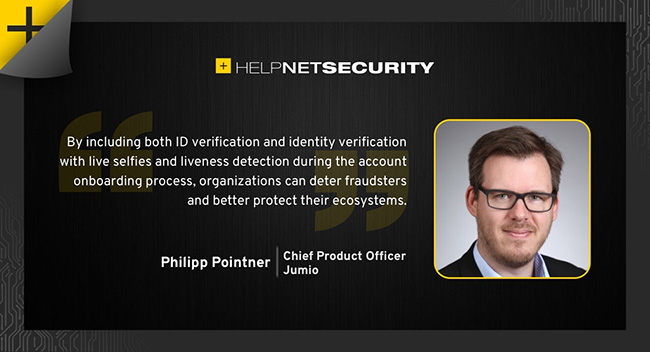 At the same time, selfie-based fraud rates were five times higher than ID-based fraud. This illustrates the growing number of stolen ID documents available on the dark web for purchase and, more importantly, the growing need to determine if an ID is authentic and belongs to the user.

Selfie fraud rates higher than fraud based on government-issued ID

In fact, selfie fraud rates were significantly higher than fraud based on just a government-issued ID. The fraud associated with the selfie averaged 7.15% globally in 2020, compared to 1.41% for ID-only verifications.

The report is based on the analysis of tens of millions of transactions from a variety of industries and geographies around the globe. It targets the period of January through October each year and the month of November to cover the holiday shopping period.

“It highlights the critical importance of requiring a selfie to corroborate the remote user’s digital identity. By including both ID verification and identity verification with live selfies and liveness detection during the account onboarding process, organizations can more effectively deter fraudsters and better protect their ecosystems.”

These findings are especially timely as more and more organizations are migrating from legacy methods of identity verification, which are not equipped to detect sophisticated methods of new account fraud.

According to Gartner’s 2020 Market Guide for Identity Proofing and Affirmation, 80% of organizations will be using document-centric identity proofing as part of their onboarding workflows by 2022 — an increase from approximately 30% today.