Startpage announced results of its survey exploring the attitudes of Americans towards protecting their own privacy online. The results found a gap between the high levels of online privacy awareness and concern respondents report, and the low levels of action they take to combat increasingly egregious assaults on their privacy. 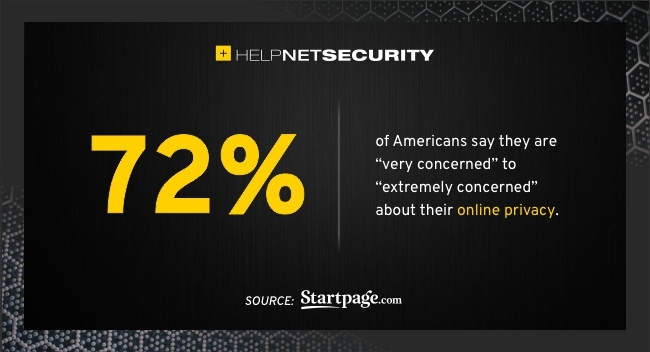 Internet usage in 2020 rose sharply compared to pre-pandemic levels. More online activity also drove more consumer consciousness around what happens to their online data; 72% of Americans say they are “very concerned” to “extremely concerned” about their online privacy.

Additionally, over the past year 62% of U.S. consumers cited stated that they have become more aware of how their personal data is used online, including:

Despite what many brands want to believe, 42% of Americans are not comfortable receiving ads that target their browsing history, location, sexual identity, political affiliation, and/or age. People also see more value in their personal data staying private than them receiving personalized recommendations for TV shows or products, tailored search results, or even exclusive deals.

Beyond getting a pulse on Americans’ online privacy concerns, the survey explored what action individuals have taken, and plan to take, to protect their personal data online. Startpage found a gap between the 72% of respondents that are very or extremely concerned about their online privacy and concrete action taken to combat these concerns.

17% of people admitted to taking no action to protect their personal data online in the past 12 months and among those that did, 60% updated a password online. Not many people are actively taking precautions beyond changing passwords.

The survey findings point to a collective ‘privacy inertia’ plaguing people’s ability to fight back against the understood assault on their privacy. For example, among certain groups, breaking through the ‘network effect’ is perceived to be almost too tough to try.

Younger age groups and men are most likely to say it’s easier to break up with a romantic partner or lose 10lbs than it is to quit using Google or social media.

To help better understand why high levels of awareness don’t translate to high levels of action, Startpage sought the expertise of Timothy A. Pychyl, Ph.D., Associate Professor of Psychology at Carleton University, whose research on procrastination reveals two patterns in the survey data.

First, ‘lack of familiarity’ with privacy-focused options or how to make the change was perceived by half of respondents to be the number one barrier to enacting their intentions for change. According to Dr. Pychyl, this mirrors results in his research where uncertainty highly correlates with procrastination:

“‘Privacy inertia’ shares many similarities with other irrational delays in our lives. When we don’t know what to do, we often delay doing anything, despite expecting to be worse off for this delay, which is, of course, the irrational self-defeating aspect of procrastination,” said Dr. Pychyl.

“In addition, procrastination research makes it clear that present-self would rather put off any effort to future-self. Despite the best of intentions and even a sense of urgency to get something done, if the task at hand is aversive in some way because we don’t know what to do, or it’s perceived as boring, frustrating or effortful, we’re more likely to put it off,” he continued.

How to motivate cosumers

So how can Americans get motivated to make a privacy-related change in 2021? Dr. Pychyl offers a tip based on psychological science: “Making specific implementation intentions for action is effective, particularly in the form of the conditional ‘if . . . then.’ For example, ‘if I’m about to look up a term with a search engine, then I will take five minutes and choose a private search tool.’ This approach provides a clear cue for action which makes it more likely that we’ll remember our intention and act.”

Robert E.G. Beens, CEO of Startpage implores people to follow the approach laid out by Dr. Pychyl, stating: “If millions of consumers each took one quick, motivated action to protect their privacy in 2021, we’d go a long way collectively to regaining our online freedom.”