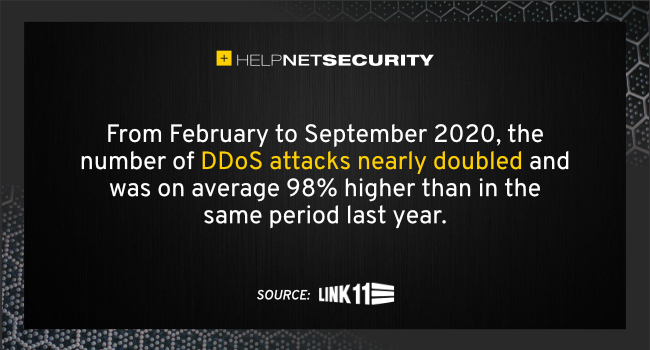 The analysis showed a boom in DDoS attacks that were closely linked to the pandemic.

As the attack surfaces for companies have increased in size and complexity due to the digital transformation triggered by the pandemic, DDoS attackers have adapted to these trends. In addition to VPNs and APIs, attackers also focused on CRMs, databases, and email and web servers, which attacks extending across all layers.

“We’ve seen a large increase in vulnerabilities that can be exploited by DDoS attacks,” says Marc Wilczek, Managing Director of Link11. “Attackers are constantly scanning the internet for new ports and protocols that can be used to overload companies’ IT infrastructures. Not all companies have adapted to this threat, and there have been many headline-grabbing outages as a result.”

The report revealed that cybercriminals began ramping up their DDoS extortion efforts in the second half of the year. Extortionists posing as Fancy Bear, Cozy Bear, Armada Collective, and Lazarus Group mainly targeted operators of critical infrastructure and providers of financial services, eCommerce, and hosting services. Often using large-volume warning attacks of over 50 Gbps, the extortionists pressured companies to pay ransoms ranging from five to 15 Bitcoins.

The report also suggests that DDoS attacks will continue to be prevalent in 2021. Digital corporate IT, cloud services and APIs will continue to experience heavy DDoS fire in the coming months and companies should include the threat of DDoS extortion in their risk assessments.