78% of businesses plan to increase their spending on automation initiatives in the coming 12 months, SnapLogic research reveals. 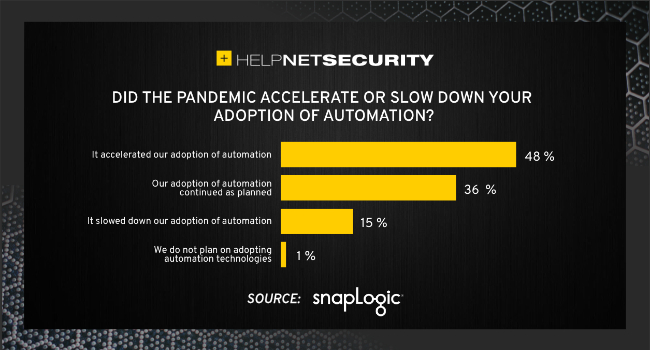 The study also found that this increased spending comes after a year in which 48% of IT decision makers (ITDMs) already accelerated their automation projects as a result of the disruption caused by the COVID-19 pandemic.

Cost savings as the primary driver behind new automation initiatives

The research, which was conducted across the US and UK, found that cost savings were the primary driver behind new automation initiatives, according to 63% of ITDMs. However, other benefits were cited, with 60% employing automation to increase customer engagement and satisfaction, and 59% using automation to drive employee productivity.

Notably, signaling a difference in how the two markets may view the benefits of automation, 63% of US ITDMs adopted automation to grow topline revenues in comparison to just 38% of those in the UK.

“In conversation with customers, as well as peers in the industry, it’s clear that automation has helped many businesses adapt and respond to the disruption caused by COVID-19,” said Craig Stewart, CTO at SnapLogic.

“Automation has not only saved organizations time and money, but it’s also facilitated faster response times to business demands. This has enabled employees to focus on value-adding tasks over the mundane, repetitive ones, which in turn has helped organizations more quickly meet changing customer expectations.

“With uptake anticipated to increase in the coming year, it is essential for IT and business leaders to equip themselves with the right strategies, tools, and best practices to implement automation to its full effect.”

Automation is occurring within IT and across different lines of business. According to ITDMs, 68% focused their initial projects on automating IT processes before extending their learnings to lines of business.

However, again, there were differences between the UK and US respondents, with those in the UK almost four times more likely to focus their first projects on financial processes or sales processes compared to those in the US. But, encouragingly, 98% agree that it’s important to take an enterprise-wide approach to automation rather than rushing into one-off, isolated projects that won’t scale.

While businesses acknowledge the benefits of automation and are investing accordingly, there are still hurdles to overcome. When asked if anything was hampering the rollout of their automation initiatives, legacy technology (55%), a lack of internal skills (40%), a shift to remote working (40%), and compliance issues (37%) were called out as the biggest challenges for ITDMs. 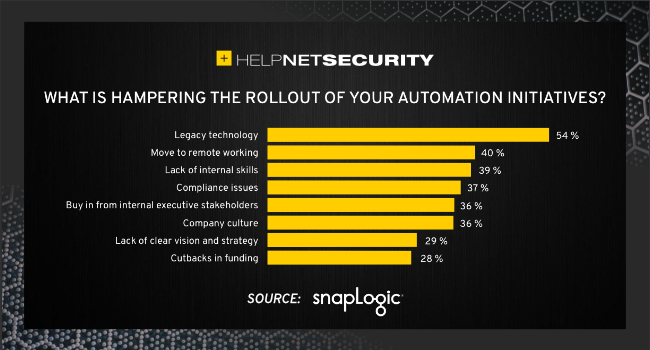 Getting the right technology stack in place is essential for those undertaking automation initiatives. The most critical items for that toolkit were an integration platform as a service (iPaaS) solution (54%) and BPM (business process management) technologies (53%). Notably, just 21% called out RPA (robotic process automation) technologies as a required part of their enterprise automation toolkit.