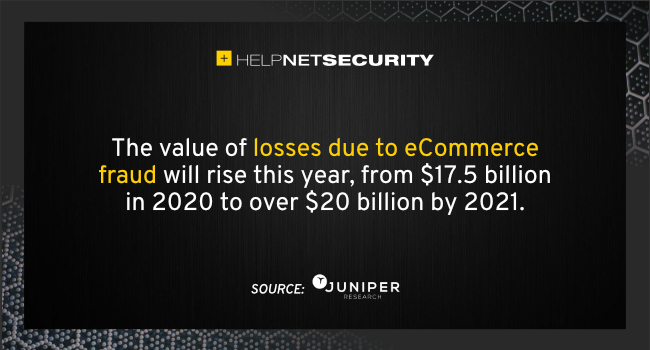 The research found that fraudsters have targeted consumers as they have increased their eCommerce use; exposing insecure fraud mitigation processes from merchants who are unfamiliar and unprepared for the continuing fraud challenges in this market.

The research identified that merchants need to do more to implement fraud prevention strategies across all of their eCommerce channels, or they will continue to experience large losses. The use of AI will enable behavioural biometrics in this area, which will increase security across all potential fraud channels.

The research found that while merchants will be keen to reduce fraud rates from their current levels, they will be hesitant to introduce extra friction into the checkout process.

The report identified that clear messaging around security checks and automated behavioural analytics leveraging AI are key capabilities in preserving the user experience.

Research co-author Susan Morrow explains: “While the need for security is greater than ever, the competitive eCommerce environment means merchants will need to ensure that extra security checks are justified to the user, or they risk higher cart abandonment rates.”

China will be the single largest eCommerce fraud market

The research also found that China will be the largest single eCommerce fraud market in the world; accounting for over 40% of eCommerce fraud losses globally in 2025, at over $12 billion. The research identified a massive eCommerce market and a relative lack of fraud detection and prevention platform deployment as the key drivers behind this.

The research recommends that merchants operating in China should invest in fraud detection and prevention now, or they will increasingly face damage to their already slim operating margins.