VMware announced findings from a study on the relationship between IT, security, and development teams as organizations adopt a zero trust security model. The study found that security is still perceived as a barrier in organizations, with 52% of developers believing that security policies are stifling their innovation. 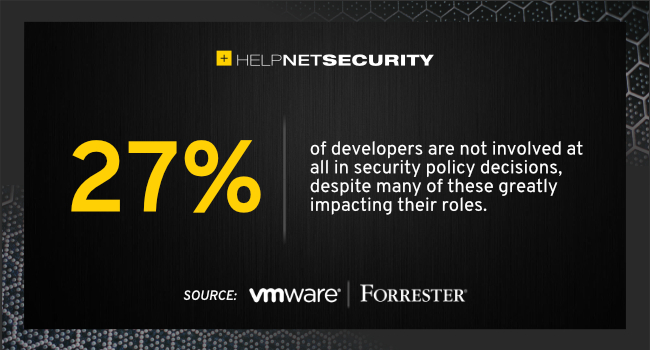 Forrester Consulting surveyed 1,475 IT and security leaders and discovered that only 22% developers strongly agree that they understand which security policies they are expected to comply with.

Alarmingly, 27% of the developers surveyed are not involved at all in security policy decisions, despite many of these greatly impacting their roles. Organizations where security and development teams have a positive relationship can accelerate the software development lifecycle five business days faster than those without – demonstrating how speed to market and competitive advantage are at stake here.

Seventy-three percent of respondents agreed that their senior leadership focuses more on strengthening the relationship between development and security than they did two years ago, but relationships are still strained.

In fact, 37% decision makers reported their organizations’ teams are not effectively collaborating or taking strides to strengthen relationships between security and development teams. Lack of role definition for development teams, lack of communication between teams and competing priorities have major impacts on collaboration.

“Our research shows that security needs a perception shift,” said Rick McElroy, principal cybersecurity strategist, VMware. “Rather than be seen as the team that only swoops in to fix breaches and leaks, or who ‘gets in the way’ of innovation, security should be embedded across people, processes, and technologies. Security needs to be a team sport that works alongside IT and developers to ensure protection across clouds, apps and all digital infrastructure.

“We have to develop a culture where all teams have shared interests and common goals or metrics, and where they speak one language. There’s overwhelming value to the business when IT, security, and developers are all part of the decision making, design, and execution.”

Teams expected to be unified

Shared team priorities and engagement will pave the way forward and there’s already progress being made on this front. 53% of respondents expect security and development teams to be unified within three years. And 42% expect security to become more embedded in the development process in that same period.