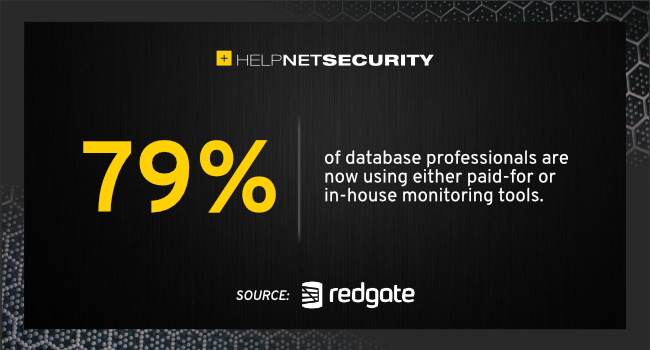 The increase is partly down to the ongoing growth and complexity of database estates, with IDC predicting the installed base of storage capacity will increase by 240% between 2021 and 2025, and virtually every business sector seeing a big shift to the cloud.

It’s also, however, down to the changing demands from organizations, with the survey showing they expect the efficiency and performance of growing estates to be maintained, security and compliance concerns to be fully addressed, and the visibility of monitoring data to be widened beyond Database Administrators (DBAs) to developers and IT teams.

This in turn, increases the pressure on DBAs, with many reporting they are expected to do more with less. Hence the rise in the use of database monitoring tools, which appear to reduce frustration, save time and allow DBAs to focus their efforts on contributing value to the business elsewhere.

As Kathi Kellenberger, Microsoft Data Platform MVP and Simple Talk editor at Redgate, explains: “While a DBA could be responsible for just one SQL Server instance, typically it’s dozens and could be thousands too. Without a good monitoring tool in place, the DBA will constantly be putting out fires instead of learning about and taking advantage of new features, tuning poorly performing queries, planning for new systems and contributing to more worthwhile projects.”

A good monitoring tool can give a DBA and the wider IT team a single pane of glass to watch for issues on all the SQL Server instances they manage, both on-premises and in the cloud, provide alerts when problems do arise, and drill down to the cause in minutes rather than the hours it would take with manual monitoring.