A BetterCloud survey of more than 500 IT and security professionals reveals the latest challenges of managing SaaS at scale, particularly as digital transformation catapulted forward in 2021 — and IT kept the momentum going. It also sheds new light on SaaS file security, the state of SaaSOps automation, the workplace of the future, and more. 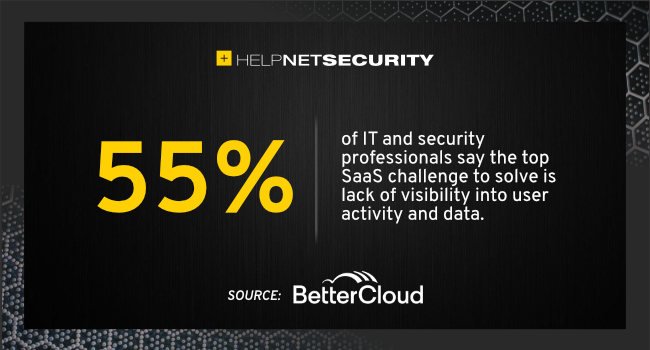 SaaS adoption continues to explode. In a year like none other, organizations have embraced SaaS faster than ever before. Up from an average of 80 apps last year, this year organizations use 110, for a 38 percent increase. This is nearly a 7x increase in SaaS app usage since 2017, and almost a 14x increase since 2015.

More SaaS brings more challenges. 55 percent of respondents say the top challenge to solve is lack of visibility into user activity and data. The next two biggest challenges? Knowing all SaaS apps in use and consistently managing app configurations.

The well-meaning but negligent employee poses the biggest data loss threat—by far. When it comes to data loss, the biggest threat is not from hackers or disgruntled employees. Instead, 72 percent of organizations say it’s the everyday employee who has good intentions and is just trying to do their job, but may inadvertently expose sensitive information along the way.

SaaS security is top of mind for IT. 69 percent of respondents worry about unsanctioned SaaS apps. Additionally, 46 percent say they have difficulties securing user activities within SaaS apps. This year, as the world reopened for business, SaaS file security violations have spiked 134 percent, and files containing PII have grown 1944 percent year over year.

In response to the past year, IT’s role is becoming more strategic. This past year, IT’s role shifted from functional to strategic. They’re driving innovation, transforming the employee experience, and becoming trusted business partners—ultimately leading the way to tomorrow’s workplace. 76 percent of respondents report being more or much more strategic over the last 12 months.

Levels of SaaSOps automation will nearly double in the next 3 years. SaaS-Powered Workplaces report that 45 percent of their SaaS operations are already automated and estimate it will rise to nearly 80 percent within the next three years.

The SaaSOps role is here to stay. 60 percent of respondents already use the term “SaaSOps” in their job title/description or plan to include it in the future—a 100 percent increase from last year.

“We’ve been surveying the IT community for almost a decade and one thing is certain: SaaS continues to grow exponentially as a strategic component of the digital workplace,” said David Politis, CEO, BetterCloud.

“But we’ve also consistently seen the management and security challenges move in lockstep with that growth. This year’s report once again sheds light on IT’s biggest pain points and concerns, and the trends in SaaS adoption fueling business.”