Software-as-a-Service (SaaS) apps are a treasure trove of information. They’re where business takes place and decisions get made, so it’s not surprising that they’re attractive targets for bad actors. 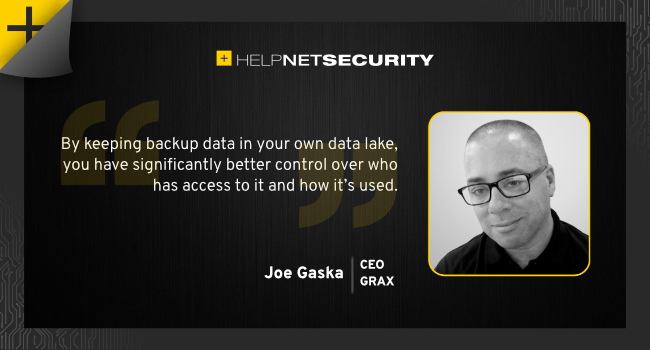 But while there’s lots of bustle around protecting data that resides in on-premises apps, when it comes to protecting data in SaaS apps, it’s pretty much… crickets. Why? Mainly, it’s because many enterprises assume SaaS vendors protect their customers’ data in those apps. But the truth is the vast majority of SaaS vendors don’t do that and, at the end of the day, organizations should accept that their SaaS app data is their responsibility.

One way they can better protect and preserve crucial SaaS app data is by having the right backup in place.

Once companies realize their business-critical SaaS data is at risk, backup becomes a no-brainer. Without it, exposure levels go through the roof.

Make sure your SaaS app backup system is set up to:

Many companies don’t have full control over access to their SaaS data, even if they use backup solutions. That’s because many SaaS backup solutions require the data to be stored in, or flow through, the backup vendor’s infrastructure.

When data lives in third-party applications rather than an enterprise’s own environment, organizations are often at the mercy of those applications – unable to enforce restrictions on where the data goes yet still responsible in the event of a data breach. The more systems your data touches or flows through, the more entry points there are for cybercriminals.

Preserve all your SaaS data

The frequency at which your SaaS app data is backed up is very important. In the backup market, this is called RPO (Recovery Point Objective), and refers to the amount of data loss your company is willing to accept if you’re unable to recover your data. Most companies try to get under one hour’s worth of loss. But, according to ESG, that trend is moving towards less than 15 minutes. For security purposes, it really needs to hit zero minutes. This is especially true for mission-critical SaaS apps. Real-time data capture means no data gaps.

If a breach occurs and data was changed or corrupted, you want to know who took the actions as well as the sequence of actions that were carried out. This also helps enterprises meet ever expanding regional, national and international data regulations, which often require auditability, access control and historical records of changes in sensitive data.

1. Take back ownership: Bring your own cloud

Fortunately, there are SaaS backup solutions that let you own your own data. They back up directly from the SaaS app into your own data lake, and store it there, without touching the backup vendor’s infrastructure.

By keeping backup data in your own data lake, you have significantly better control over who has access to it and how it’s used. Putting proper restrictions in place minimizes the surface area of data exposure. This limits who can access an organization’s data and the companies or applications that the data passes through, which in turn limits the number of entry points cybercriminals can access.

Likewise, keeping backed-up SaaS data in your own data lake can help limit the number of copies of data floating around an organization. If it’s in the lake and accessible to authorized internal users, then they don’t have to download copies from the SaaS app for their own use. Fewer copies mean fewer access points for bad actors.

Enterprises should back up everything at the highest fidelity, or frequency, possible.

By keeping every version of the data, and logging every change, enterprises can create an irrefutable record of changes that data undergoes, encompassing all those who touch the data and what channels it passes through. This ensures organizations have an audit trail to quickly trace who has accessed it and what data has been changed or deleted – making it easy to identify if, when or where something went awry.

For example, keeping all historical data allows enterprises to more easily detect anomalies in behavior – like the presence of ransomware – by comparing it against other sets of historical data. This gives enterprises the ability to quickly be alerted to, identify and address problems as they happen, potentially preventing bigger breaches or data loss from occurring. Moreover, there’s a strategic advantage to having vast sets of historical data available. Enterprises can tap this data, analyze it and learn from their past – helping them take a proactive approach to SaaS app data protection.

The data that lives in your cloud applications is much more vulnerable than you think. Backing up that data into your own data lake can reduce that exposure by orders of magnitude and help mitigate any damage that occurs. Why not hit “record” on your SaaS app data today?