A Kasada survey covers the state of bot mitigation exclusively from the perspective of organizations already using anti-bot solutions. 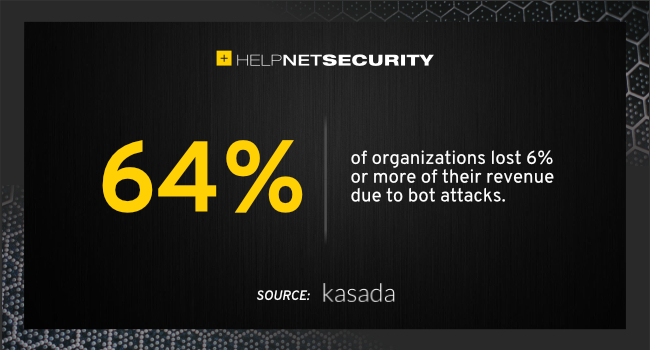 The state of bot mitigation

Researchers found that 77% of companies spent $250,000 or more on mitigating bot attacks within the past 12 months, while 27% spent in-excess of $1 million, resulting in a loss of revenue and increased operational costs.

With 80% of executive teams asking about bot attacks within the past 6 months, bot attacks and their effects have become a C-Level concern. As a result, 63% of companies plan to increase their spending on bot prevention over the next 12 months.

The research shows that most companies are not prepared to protect against the evolving bot landscape using the solutions they have in place. In fact, 80% of companies say that bots are becoming more sophisticated and difficult for their security tools to detect, and only 31% are very confident in their ability to detect new bots never seen before. Only 15% report that their solution retained effectiveness a year after initial deployment.

In addition to CAPTCHA defeat being challenging to stop, 87% of companies say the customer experience would be improved by eliminating CAPTCHAs altogether, demonstrating the need for an alternative means of validating traffic is human.

Enormous amount of time and resources wasted on bot mitigation

A resounding 66% of the total funds necessary to fight bot attacks are attributed to the ongoing management, maintenance, and post-event remediation of their bot mitigation solution – as opposed to the cost of the anti-bot solution itself.

According to the report, 65% of companies say it took more than a week to configure and optimize their bot solution prior to deployment. 92% of organizations say that the person responsible for bot mitigation rules and policies spends on average a total of 25 or more hours each month managing or maintaining them. In addition, 63% of companies report that it takes one week or more across roles to remediate a successful bot attack.

“While all organizations surveyed prioritize the need to defend against bad bots, most cannot fend them off due to ineffective bot mitigation solutions,” said Sam Crowther, CEO, Kasada.

“More has changed in the bot ecosystem over the past 2 years than the prior decade. Today’s organizations need a different approach, one that is proactive and constantly adapting alongside attackers.”