Radware has published results from its report which provides an overview of the DDoS attack landscape, application attack developments, and unsolicited network scanning trends. 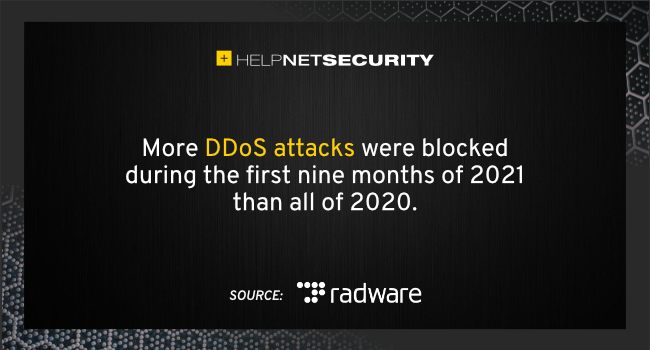 “More DDoS attacks were blocked during the first nine months of 2021 than all of 2020,” said Pascal Geenens, director of threat intelligence for Radware.

“During the third quarter, DDoS records for large volumetric attacks were broken across three continents. At the same time, phantom floods, or micro attacks that typically fly below the radar, increased. The reality is organizations need more granular detection and multi-layer defenses to protect against stealthier and more complex DDoS attacks.”

Quarterly trends:
Although the total number of events per company for the third quarter was slightly below previous quarters in 2021, the number stayed above the highest quarterly level recorded in 2020.

Yearly trends:
Web application attacks based on known vulnerabilities and techniques are ramping up quickly. The number of blocked web security events per company doubled every quarter for the first three quarters of 2021.

Predictable resource location attacks, the most important security violation in the third quarter, was witnessed twice as often as SQL injection, the second-most violation, followed by code injection attacks and cross-site scripting attacks. The top two violations reported in the third quarter are aligned with the top web application security concerns as reported in the OWASP Foundation’s recently published 2021 top 10 list.

Industry trends:
In the third quarter of 2021, the most attacked industry was banking and finance, which accounted for almost 23% of blocked web security events, followed by government (16%), technology (15%), and retail and wholesale trading (12%).

According to Geenens, “Network scanning and attack activity was marked by opportunistic and random scanning that constitutes a large part of the vulnerability and exploit threat landscape. Malicious actors continuously leverage old and freshly disclosed vulnerabilities such as remote command execution and command injection exploits that are easy to integrate into existing malware and exploit tools.

“Along with the evolution in cloud resources and services, there is no more hiding on the internet. Every deep corner of the internet gets inventoried in convenient IoT search engines.”