Apricorn announced new findings from Freedom of Information (FoI) requests submitted to 16 government departments into the security of devices held by public sector employees. NHS Digital recorded a total of 393 lost or stolen devices between September 2020 and September 2021, including 52 mobiles, 19 laptops and 3 tablets. In addition, a further 319 laptops were recorded as lost due to having no record of their disposal. 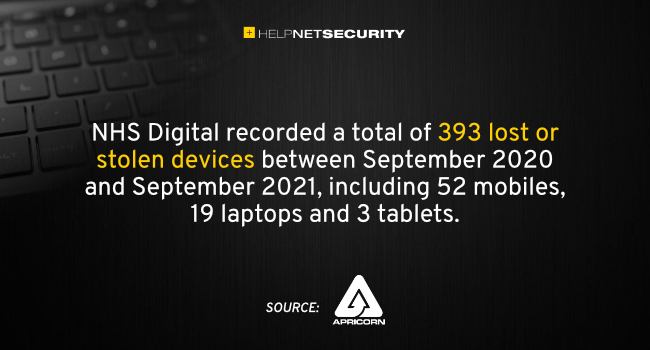 Despite the number of misplaced devices, NHS Digital were not required to notify the Information Commissioner’s Office (ICO) of any lost or stolen devices in the past year as these incidents related to encrypted devices and were unlikely to result in a risk to individuals’ rights and freedoms as required under Article 33 of the UK GDPR. All organisations, whether they operate in the commercial or public sector, should take heed of the level of mitigation encryption brings in a breach event.

“Lost and stolen devices are, in most part, unavoidable. However, there are still a large number of loses, anyone of which could very easily put sensitive public data at risk. Fortunately, in the case of NHS Digital, despite the mishap in recording the disposal of a large quantity of laptops, their security processes ensured that all these devices were encrypted, and as a result, the data they housed was protected” said Jon Fielding, Managing Director, EMEA, Apricorn.

Meanwhile, FoI requests submitted to the Ministry of Justice (MoJ) revealed a total loss of 184 mobile phones, PCs, laptops and tablet devices in the same period compared with 161 in 2019/20. These increasing numbers, alongside the fact the MoJ also declared an alarming 2152 data breaches in that time (September 2020 and September 2021) is frightening given the nature of the information at risk.

Her Majesty’s Revenue and Customs (HMRC) shared detailed information on the number of lost and stolen devices between (September 2020 and September 2021), which totalled 346, a drop on the 375 misplaced in 2019-2020. HMRC also noted that 111 of those devices were lost in tracked transit and suggested that the number of losses during transit reflect the higher volumes of movements to and from staff working from home as a result of COVID-19 restrictions.

The Department for Education (DfE) also confirmed it had lost, or reported stolen, 116 devices between September 2020 and September 2021. This was 23 fewer than 2020, but still worryingly high and exceeds the 91 lost devices highlighted in the 2019 findings.

“Whilst it’s great to see the numbers declining for a number of government departments, big or small, these losses and subsequent breaches of information prove that there is still work to be done. These departments must educate their employees on data security best practices and recognise that security and compliance are not a tick box exercise, but one that requires continual effort through enforced policy, processes and technology,” said Fielding.

Of those that responded, just 5 government departments confirmed they have a data backup in place. Additionally, all those questioned declined to respond, or would neither confirm, nor deny if they had been subject to any ransomware demands in the past year.

Fielding added: “We are putting our trust in these government departments to responsibly and securely manage and store sensitive personal data and intellectual property. Encryption is the safest way to do so, and hardware encrypted storage devices should be provided as standard to ensure the data on them is unintelligible should they go MIA.

Knowing that these government departments have encryption in place is reassuring. What’s more, they have additional data backups too, meaning mission-critical applications are functional and data can be recovered quickly. A regular and reliable backup process will protect businesses from unexpected data loss from all potential sources and is as simple as storing copies of important files on hard drives, or other storage devices connected to your systems or network. However, for reasons already explained, these devices must be encrypted”