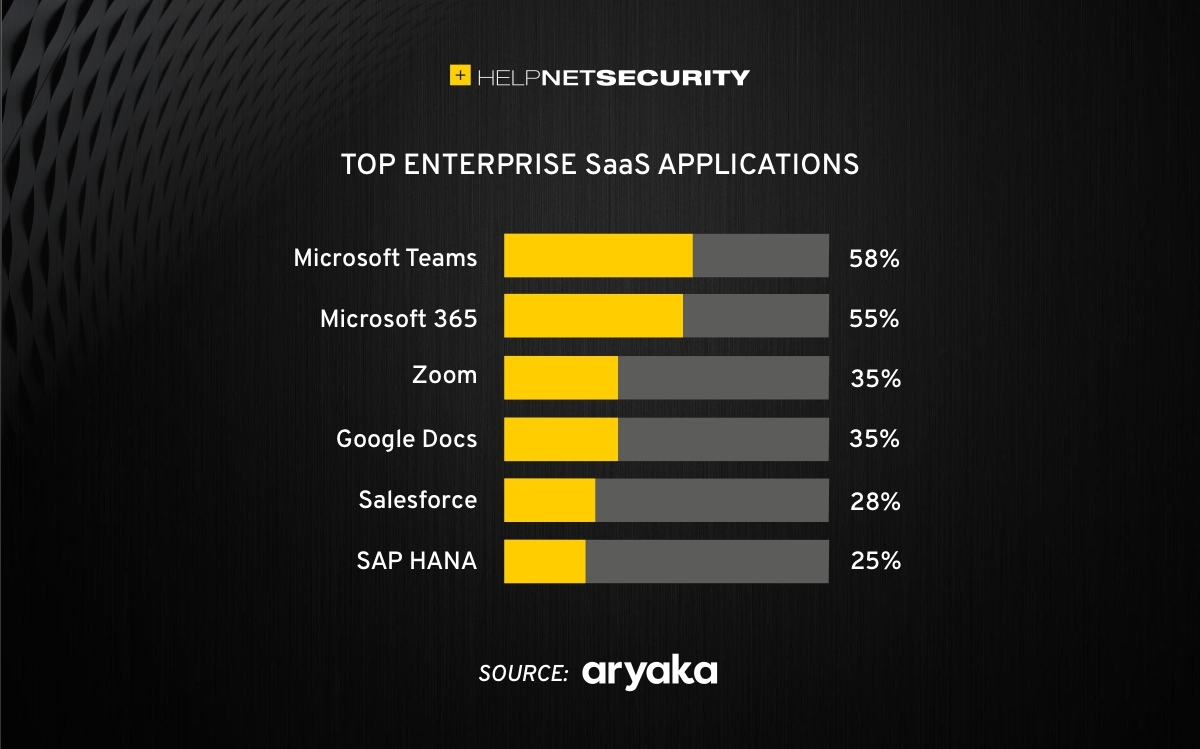 “This year’s Aryaka State of the WAN includes many valuable insights backing up trends we see in the industry. These include the effects of hybrid work, with 75% projecting a quarter of their employees to remain at least part-time remote, and cloud connectivity demands skyrocketing with 51% planning to move away from traditional data centers over the next two years. Both initiatives will require more sophisticated network-as-a-service (NaaS) solutions with integrated security offerings,” said Scott Raynovich, chief analyst of Futuriom.

Collaboration and Productivity suites have gained traction. The Microsoft suite has gained momentum, with Teams identified by respondents as the most deployed application, growing its footprint by over half, from 34% in 2021 to 58% this year. Conversely, Google Docs dropped from 41% last year to 35% today with Microsoft 365 now at 55%.

For China, basic connectivity concerns dropped noticeably from the last report, at 45% in 2021 to 30% today. In contrast, compliance and regulatory issues are now in the lead at 50%.

A renewed interest in ROI was reflected in this year’s report, with 36% of those responding having cost concerns, an increase of 16% vs last year. Though budgets are expected to increase by 25%, both for networking and security, the focus on ROI implies that these increases must be spent judiciously.

IT professionals were less concerned vs previous years about the newness of the technology (28% vs 31% in 2021), and whether applications will perform properly (29% vs 36% in 2021), speaking to a greater confidence in application support. As change management takes priority, there is an increased focus on observability and control, increasing by 9% (69% vs 60% last year).

Acceleration of remote and hybrid work: The report looks at challenges in supporting the hybrid workforce, hybrid work trends, and investments planned to support this new environment. 75% state that at least a quarter of their employees will remain hybrid post-pandemic, aligned with the closure of physical facilities, with a quarter stating they have closed 25-50% of their office sites. Effectively managing worker movement between on-premises and remote requires dynamic bandwidth reallocation, identified by 61% as very important.

Application performance and consumption: In addition, the report dives into the diversity of applications in use and resulting challenges, how enterprises plan to address these, and potential concerns. As noted earlier, collaboration and productivity applications like Microsoft Teams and Office 365 experienced some of the strongest growth, but there was an overall uptick in SaaS application adoption including Zoom (35%), Salesforce (28%), and SAP/HANA (25%). Performance still must improve, with 42% identifying slow performance for remote and mobile users a key issue, followed by 37% calling out slow performance at the branch.

Managing complexity and managed services adoption: The report addresses what managed services enterprises expect, including SD-WAN and SASE implementation plans and budgets, as well as perceived barriers to adoption. This section also looks at MPLS migration. In evaluating managed services, enterprises continue to demand more from their providers, and are looking for a wider set of offers, an all-in-one SD-WAN and SASE that includes the WAN (45%), security (67%), application optimization (40%), last mile management (29%), and multi-cloud connectivity (27%).

The movement to SD-WAN and SASE also follows the movement away from MPLS, with 46% planning to terminate some or all contracts over the next year. Enterprises are generally bullish on their budgets, with a quarter expecting it to grow by 25% or more, and a total of three quarters expecting at least 10% growth.

Networking and security convergence including a SASE architecture: SASE represents a promise of a converged cloud-first architecture, but there are concerns on complexity and adoption. 42% state that lackluster application performance is a time sink, and 34% consider security to be a major priority. This path to SASE adoption includes setting a strategy (35%), phasing out of legacy VPNs (32%), as well as consolidating cloud security with zero-trust (29%).

Top desired capabilities include a SWG (47%), SD-WAN (36%), and FWaaS (28%). Implementation concerns identified earlier are balanced by expected advantages that include time and cost reduction (37%), as well as agility (33%), while decision-making is still mostly distributed across networking and security, 41% state it is now consolidated. Finally, over two-thirds plan to consume SASE as a managed offer.