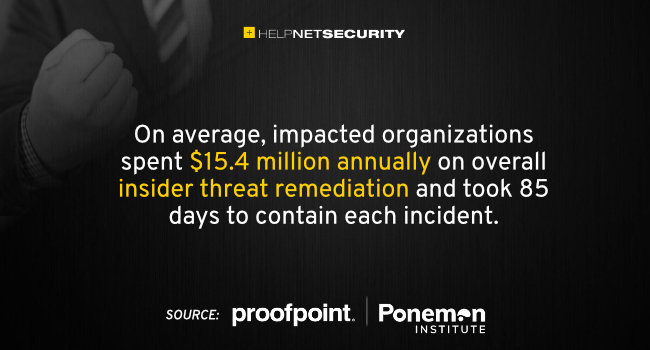 The report, conducted by Ponemon Institute, surveyed over 1,000 IT and IT security practitioners across North America, Europe, Middle East, Africa, and Asia-Pacific. Each organization included in the study experienced one or more material events caused by an insider.

The report reveals that over the last two years, the frequency and costs associated with insider threats have increased dramatically across all three insider threat categories, including: careless or negligent employees/contractors, criminal or malicious insiders, and cybercriminal credential theft.

“Months of sustained remote and hybrid working leading up to “The Great Resignation” has resulted in an increased risk around insider threat incidents, as people leave organizations and take data with them,” said Ryan Kalember, EVP of cybersecurity strategy at Proofpoint.

“In addition, organizational insiders, including employees, contractors, and third-party vendors, are an attractive attack vector for cybercriminals due to their far-reaching access to critical systems, data, and infrastructure. With people now the new perimeter, we recommend layered defenses, including a dedicated insider threat management solution and strong security awareness training, to provide the best protection against these types of risks.”

North American companies are spending more than the average cost on activities that deal with insider threats. The total average cost of activities to resolve insider threats over a 12-month period is $15.4 million. Companies in North America experienced the highest total cost at $17.53 million. European companies had the next highest cost at $15.44 million.

Five signs that your organization is at risk

Dr. Larry Ponemon, Chairman and Founder of the Ponemon Institute commented: “Insider threats continue to climb, both in frequency and remediation cost. That said, we are seeing the risk of malicious insider threats increase – with more users accessing business data from outside the confines of the office. This can blur the security team’s ability to identify and differentiate between well-meaning employees, and malicious insiders trying to siphon sensitive business data.”