Nearly one in 10 smartphone users in the UK (9%), as many as 5.7 million people, have fallen victim to identity fraud in the last 12 months, according to a research by GBG. 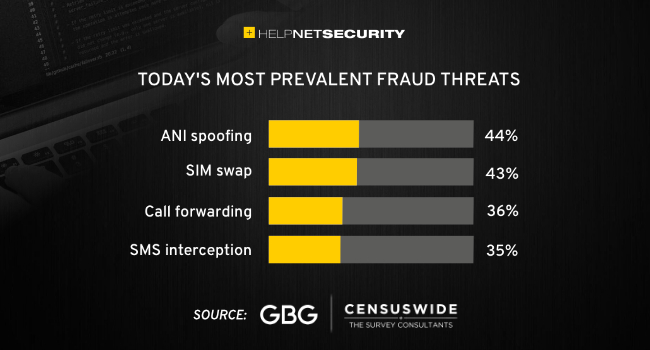 The report can reveal that young adults aged 18-to-24 were hardest hit with 18% becoming victims of identity fraud compared to 9% of 45-to-54-year-olds, and just 3% of consumers aged 55 and over.

The research also uncovered high levels of anxiety, with a large majority of the Brits surveyed worrying that becoming a victim of fraud is inevitable. 93% of respondents (94% of 18 to 24-year-olds) felt concerned that they will fall victim to fraud in the future.

Among those British consumers personally impacted by identity fraud:

The research, conducted by Censuswide, surveyed both consumers, that own a smartphone, and business leaders across Europe – UK, France, Germany and Spain. The report revealed that fraud is major concern across Europe – with 9% of consumers across the continent also being hit in the last 12 months.

42% of European businesses surveyed said they had experienced known or suspected attempted fraudulent activity in the past 12 months, with 33% saying it had increased compared to last year. Those experiencing a known or suspected fraud attempt said the average transactional value of a breach was £16,000. While 25% claimed each fraud breach cost their business between £10,000 and £35,000.

Despite this, 31% of businesses don’t use technology to verify the identity of consumers. As a result, firms are putting both themselves and consumers at risk of fraud, including the growing threat of increasingly sophisticated fraud attempts such as social engineering, SIM swap and synthetic fraud.

Gus Tomlinson, Chief Product Officer, EMEA at GBG, said: “By accurately identifying and authenticating an individual, businesses can stop fraudsters in their tracks and consumers are actively looking to businesses to protect them. There is a real opportunity for businesses to step up – to not just see fraud as just a threat but as an opportunity to build trust, better protect their customers and business, and grow their customer base.”

Balancing fraud prevention and friction during ‘The Great Switch’

The report reveals that 66% of European consumers signed up to at least one new online account in the past 12 months, with 67% doing the same in the in the UK.

The research reveals that when signing up for a new account, consumers think it’s important that the process is easy (99%), secure (98%) and quick (97%).

Gus adds: “It appears that many consumers are now more than willing to ditch a brand if they have a poor onboarding experience. Most people in the UK, and indeed across Europe, have signed up for goods and services online over the past few years but the fact that so many consumers have opened completely new accounts in the past 12 months may indicate that we’re witnessing ‘The Great Switch.’ With people spending increasingly more time online, they’ve begun to re-evaluate if they’re getting the best service possible – or whether it’s time to try a new provider.

“The modern consumer demands a smooth onboarding experience and expects to be able to transact online securely. It’s all about finding that balance between fraud prevention and friction online.

“By understanding more about digital identities, layering the right data and having the best technology in place, companies can keep consumers safe in a digital world and keep up with evolving consumer expectations.”