The data center networking market size is anticipated to record a valuation of $40 billion by 2028, according to the most recent study by Global Market Insights. The market growth is attributed to the increasing data center establishment projects globally. 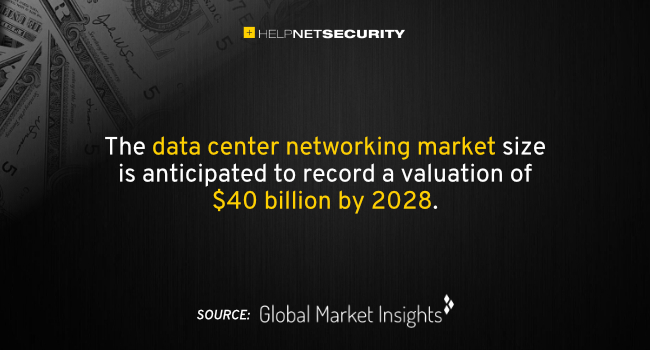 The expanding IT & telecom sector globally will offer strong growth opportunities to the data center networking market. The increasing penetration of 5G is supporting the demand for robust data traffic management solutions. Telecom operators are focusing on improving the user experience by adopting sophisticated IT components in their data center facilities.

Telecom companies are stressing on adopting reliable and robust networks that ensure continual operations. Providing uninterrupted services to customers is a crucial factor for IT & telecom service providers.

The rapidly advancing industrial sector in Europe is a major driver of the data center networking market progression. The robust manufacturing sector adopting advanced technologies, such as AI, machine learning, and cloud computing, will propel the demand for advanced networking solutions.

As instantaneous and real-time communications are extremely crucial for the efficient implementation of autonomous systems, data center providers are focusing on incorporating high-end networking equipment to ensure fast interconnectivity of systems.

With the rise in the adoption of compute-intensive technologies, such as IoT and AI, there is a high demand for efficient network management solutions. Robust networking forms the core element of these technologies, stressing the need for high-performance networking solutions.

The demand for online services, such as social networking, internet banking, video-on-demand, and online gaming sites, is increasing at a fast pace.

The rise in the number of connected factories will encourage the acceptance of data center networking solutions by the manufacturing industry. Data centers incorporate technologies, such as machine learning and AI, to automate the entire automation process through real-time analytics.