At a particularly perilous moment for privacy and security, Malwarebytes’ research uncovered a COVID bounce, a massive 2021 resurgence of cyberthreats across multiple categories following pandemic-induced declines in 2020. 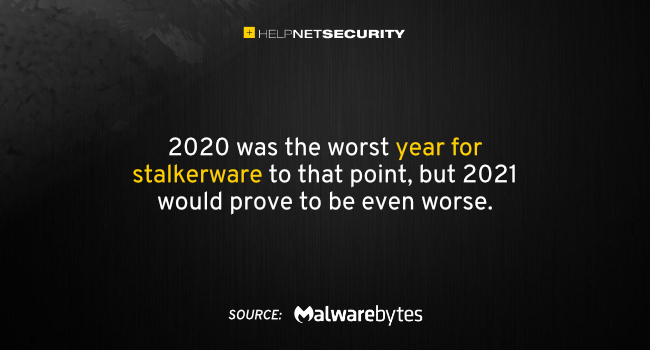 There was a 77% increase in malware detections over 2020. Business-focused cyberthreats jumped 143%, while consumer-specific threats rose by 65% to more than 152 million in 2021. This increase represents more than a return to business as usual, with detection numbers far exceeding pre-pandemic figures.

“2021 was a challenging year for both cybersecurity and user privacy, which points to alarming trends,” said Marcin Kleczynski, CEO of Malwarebytes. “With workforces still dispersed, cybercriminals capitalized on both new and latent vulnerabilities, burrowing deeply into critical infrastructure and infecting supply chains, driving increased threat volume, and homing in on targets with maximum potential for disruption. In this climate, ensuring every person and organization is thoroughly fortified against attacks through a simplified patching process and layered security is more critical than ever.”

In the wake of 2020’s lockdowns and stay-at-home orders, stalkerware surged, with spyware detections increasing 1,600% in the first six months of that year. 2020 was the worst year for stalkerware to that point, but 2021 would prove to be even worse. Android monitoring apps were detected 54,677 times and spyware apps 1,106 times, notable figures for this targeted form of abuse, especially due to Android’s history of adware issues.

Average users also began struggling with the pros and cons of Apple-developed location trackers – AirTags – that enabled potential victims to be silently monitored by perpetrators. Despite several software updates enabling AirTags to reveal themselves after periods of quiet use, millions of people still face the prospect of being monitored without consent.