Puppet revealed the findings of its report which revealed how the post-pandemic environment directly impacted DevOps salaries as organizations invest in competitive compensation and top talent. 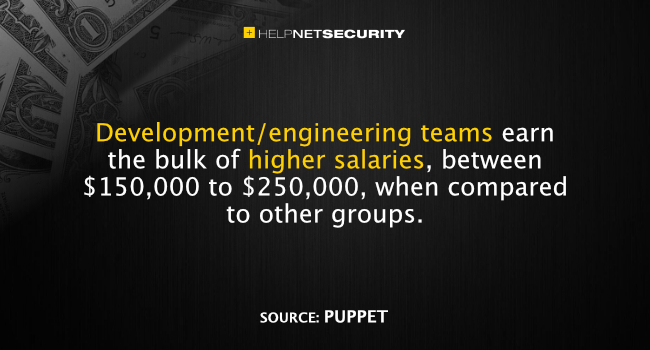 Puppet surveyed more than 2,600 technology professionals globally and found significant growth across high-income wage brackets. Specifically, the data reveals that women are steadily increasing their earning status across regions, roles, and industries. The research also indicates that other countries are catching up to the U.S. in high salary pay.

“It is exciting to see more women increasingly enter higher income brackets, especially in DevOps, which has historically been a male-dominated area,” said Abby Kearns, CTO at Puppet.

“The gradual decrease in a wage gap hopefully points to a long-term shift in pay equity. As a DevOps leader, I am inspired by this progression and I look forward to seeing more equality in wages and gender parity across DevOps overall.”

The Great Resignation and pandemic-driven digital transformation efforts have directly impacted the DevOps landscape. These transformational enterprise shifts have forced companies to offer more competitive compensation and invest in top talent to ensure sustainable success. As a result, the report found that more workers are moving into higher income levels than at any time in the past three years. In addition, companies with high-evolution DevOps are compensating their employees at the highest level, with more managers and practitioners entering the salary group earning more than $150,000.

“This year, for the first time, we asked respondents to identify not only with a job title, but with a team, given the rise in collaboration across the DevOps sector,” said Ronan Keenan, research director at Puppet. “Interestingly, development/engineering teams earn the bulk of higher salaries, between $150,000 to $250,000, when compared to other groups. This also remains consistent with platform engineers being found to be the best-paid title amongst respondents for the second consecutive year.”