A global report released by CyberArk shows that 79% of senior security professionals state that cybersecurity has taken a back seat in the last year in favor of accelerating other digital business initiatives. 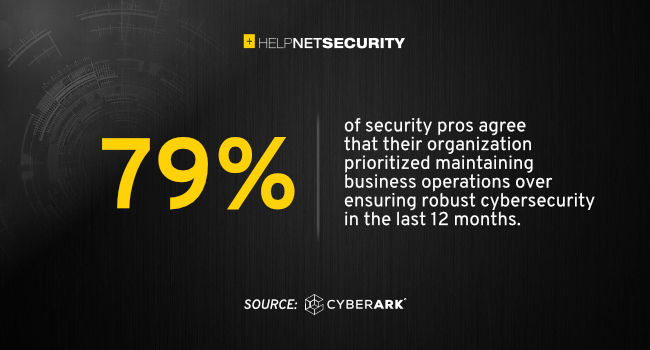 The report identifies how the rise of human and machine identities – often running into the hundreds of thousands per organization – has driven a buildup of identity-related cybersecurity debt, exposing organizations to greater cybersecurity risk.

Every major IT or digital initiative results in increasing interactions between people, applications and processes, creating large numbers of digital identities. If these digital identities go unmanaged and unsecured, they can represent significant cybersecurity risk:

Secular trends of digital transformation, cloud migration and attacker innovation are expanding the attack surface. The report delves into the prevalence and type of cyber threats facing security teams and areas where they see elevated risk:

Getting into cybersecurity debt

Security professionals agree that recent organization-wide digital initiatives have come at a price. This price is cybersecurity debt: while security programs have expanded, they have not kept pace with organizations’ investments focused on driving business operations and growth. This debt has arisen through not properly managing and securing access to sensitive data and assets, and a lack of identity security controls is driving up risk and creating consequences.

The debt is compounded by the recent rise in geopolitical tensions, which have reinforced the need for heightened awareness of the physical consequences of cyber attacks, especially on critical infrastructure:

“Spending on digital transformation projects has skyrocketed in recent years to meet the demands of changed customer and workforce requirements,” Udi Mokady, chairman and CEO, CyberArk.

“The combination of an expanding attack surface, rising numbers of identities and behind-the-curve investment in cybersecurity – what we call cybersecurity debt – is exposing organizations to even greater risk, which is already elevated by ransomware threats and vulnerabilities across the software supply chain. This threat environment requires a security-first approach to protecting identities, one capable of outpacing attacker innovation.”

What can be done to thwart cybersecurity debt?