Synopsys released a report which examines the results of more than 2,400 audits of commercial and proprietary codebases from merger and acquisition transactions, and highlights trends in open source usage within commercial and proprietary applications and provides insights to help developers better understand the interconnected software ecosystem. 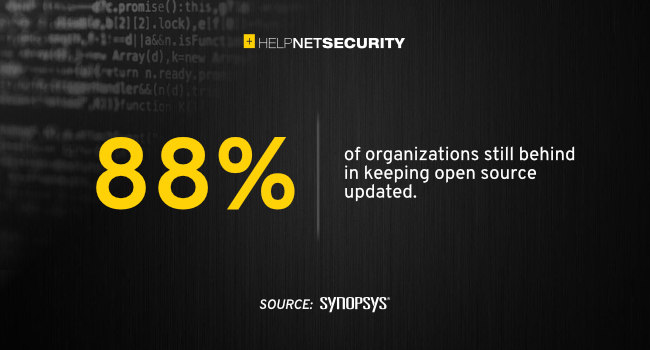 The findings underscore the fact that open source is used everywhere, in every industry, and is the foundation of every application built today.

Outdated open source remains the norm—including presence of vulnerable Log4j versions. From an operational risk/maintenance perspective, 85% of the 2,097 codebases contained open source that was more than four years out-of-date. 88% utilized components that were not the latest available version. 5% contained a vulnerable version of Log4j.

20% of assessed codebases contained open source with no license or with a customized license. Since a software license governs the right to use it, software with no license presents the dilemma of whether use of the open source component entails legal risk. Additionally, customized open source licenses might place undesirable requirements on the licensee and will often require legal evaluation for possible IP issues or other implications.

“There are justifiable reasons for not keeping software completely up-to-date,” Mackey continued. “But, unless an organization keeps an accurate and up-to-date inventory of the open source used in their code, an outdated component can be forgotten until it becomes vulnerable to a high-risk exploit, and then the scramble to identify where it’s being used and to update it is on. This is precisely what occurred with Log4j, and why software supply chains and Software Bill of Materials (SBOM) are such hot topics.”