Armis researchers have discovered five critical vulnerabilities in the implementation of TLS communications in multiple models of network switches. Collectively dubbed TLStorm 2.0, the vulnerabilities stem from a similar design flaw identified in the TLStorm vulnerabilities expanding the reach of TLStorm to millions of additional enterprise-grade network infrastructure devices.

The good news, though, is that there is no indication they’ve been exploited by attackers in the wild.

In March 2022, Armis first disclosed TLStorm, three critical vulnerabilities in APC Smart-UPS devices that allow an attacker to gain control of them from the internet with no user interaction, resulting in the UPS overloading and eventually destroying itself in a cloud of smoke.

The root cause for these vulnerabilities was a misuse of NanoSSL, a popular TLS library by Mocana. Using the Armis knowledgebase, their researchers identified dozens of devices using the Mocana NanoSSL library. The findings include not only the APC Smart-UPS devices but also two popular network switch vendors that are affected by a similar implementation flaw of the library. While UPS devices and network switches differ in function and levels of trust within the network, the underlying TLS implementation issues allow for devastating consequences.

The new TLStorm 2.0 research exposes vulnerabilities that could allow an attacker to take full control over network switches used in airports, hospitals, hotels, and other organizations worldwide. The affected vendors are Aruba (acquired by HPE) and Avaya Networking (acquired by ExtremeNetworks).

The researchers have found that both vendors have switches vulnerable to remote code execution (RCE) vulnerabilities that can be exploited over the network, leading to: 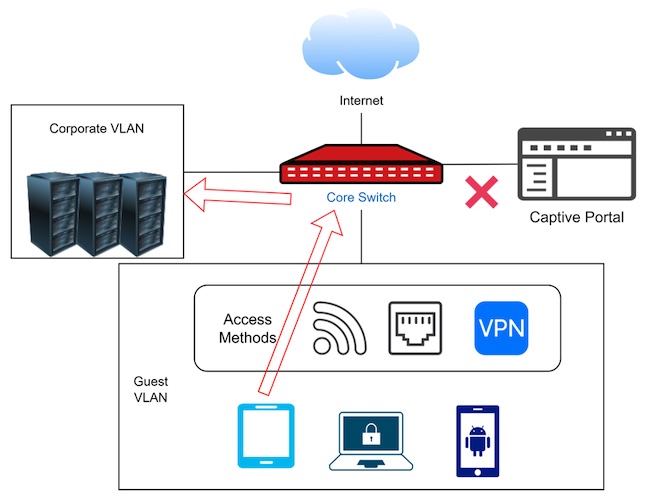 The NanoSSL library mentioned above is used throughout the firmware of Aruba switches for multiple purposes. The two main use cases for which the TLS connection made using the NanoSSL library is not secure and can lead to RCE:

The RADIUS server checks the information in the access request and responds with authorization of the access attempt, a rejection, or a challenge for more information.

There are two memory corruption vulnerabilities in the RADIUS client implementation of the switch; they lead to heap overflows of attacker-controlled data. This can allow a malicious RADIUS server, or an attacker with access to the RADIUS shared secret, to remotely execute code on the switch.

This is a similar vulnerability to CVE-2022-22805 that Armis found in APC Smart-UPS devices. The process handling POST requests on the webserver does not properly validate the NanoSSL return values, resulting in a heap overflow that can lead to remote code execution.

An improper boundary check in the handling of multipart form data combined with a string that is not null-terminated leads to attacker-controlled stack overflow that may lead to RCE.

A vulnerability in the handling of HTTP POST requests due to missing error checks of the Mocana NanoSSL library leads to a heap overflow of attacker-controlled length, which may lead to RCE. This vulnerability has no CVE because it was found in a discontinued product line of Avaya meaning no patch will be issued to fix this vulnerability, though Armis data shows these devices can still be found in the wild.

Aruba and Avaya collaborated with Armis on this matter, and customers were notified and issued patches to address most of the vulnerabilities. To the best of our knowledge, there is no indication the TLStorm 2.0 vulnerabilities have been exploited.

Armis customers can immediately identify devices that are vulnerable in their environments and begin remediation.

“The TLStorm set of vulnerabilities are a prime example of threats to assets that were previously not visible to most security solutions, showing that network segmentation is no longer a sufficient mitigation and proactive network monitoring is essential,” said Barak Hadad, Head of Research, Armis.

“Armis researchers will continue to explore assets across all environments to make sure our knowledgebase of more than two billion assets is sharing the latest threat mitigations to all of our partners and customers.”