There has been an alarming rise (13%) in ransomware breaches – a jump greater than the past 5 years combined, Verizon Business has revealed in its 2022 Data Breach Investigations Report (2022 DBIR).

Verizon has been issuing its yearly DBIR report for the last 15 years, providing the security practitioners and executives around the world a glimpse into the global trends and patterns related to cyber incidents and data breaches.

90% of the 5,212 data breaches analyzed could be put into one of these nine categories: 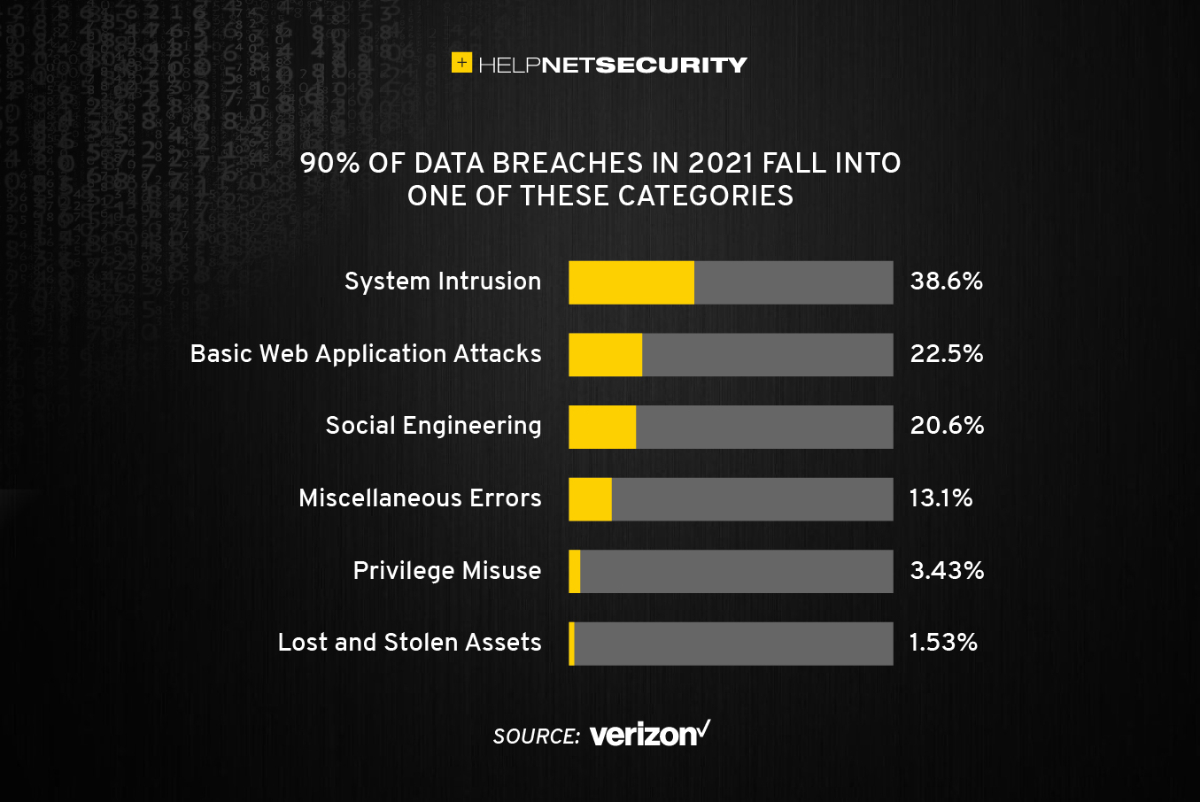 When all the analyzed incidents are taken into consideration, Denial od Service (39.7%) is the most prevalent category.

“40% of Ransomware incidents involve the use of Desktop sharing software and 35% involved the use of Email. There are a variety of different tools the threat actor can use once they are inside your network, but locking down your external-facing infrastructure, especially RDP and Emails, can go a long way toward protecting your organization against Ransomware,” the analysts noted.

Very small businesses – those employing 1 to 10 individuals – are also often targeted by ransomware gangs, and should worry about stolen credentials and social attacks (BEC scams in particular). The report includes advice on what to do to avoid becoming a target and what to do if you have become a victim.

As they pointed out, the four key paths to data breaches – including those due to ransomware – are credentials, phishing, vulnerability exploitation, and botnets, and no organization is safe without a plan to handle each of them.

Dave Hylender, Lead Author of the DBIR, says that while the report has evolved in these 15 years, the fundamentals of security remain the same: “Assess your exposure, mitigate your risk, and take appropriate action. As is often the case, getting the basics right is the single most important factor in determining success.”

Paul Laudanski, Head of Threat Intelligence at Tessian, says that while it’s staggering to see that 82% of breaches involved the human element, it’s not necessarily surprising.

“Generally speaking throughout the years, I’ve seen social engineering lead to a number of cyber incidents, from the execution of malware to phishing sites that collect credentials. It is not unlike those late-night infomercials, where people get caught in a moment that actors exploit. As humans, it’s in our nature to be helpful, but a good targeted social engineering attack will exploit this to compromise systems, breach data or withdraw funds.That’s why it’s so imperative to have solutions in place that go beyond rules and standard detections. Instead, tools must understand humans and our behaviors, patterns and subroutines in the 0s and 1s. Not just humans on the receiving end but humans on the sending end, the actors,” he opined.

“It’s also interesting to see the Verizon data breach report evolve over the years as reporting requirements have drastically changed. More education and awareness have been crucial in helping people accept that these scams unfortunately do happen more commonly than we might think, impacting both businesses and individuals, and the right thing to do is report it.”