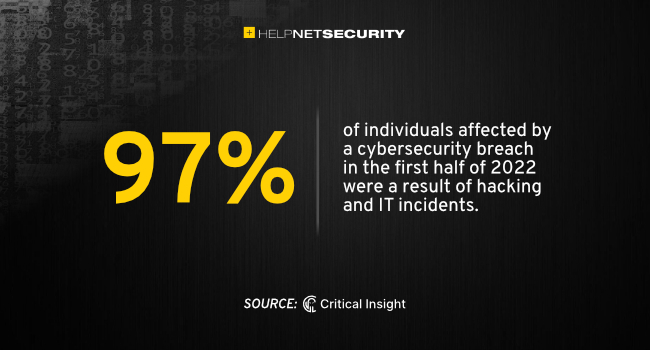 With the healthcare industry continuing to be a top attack vector for cybercriminals and ransomware threat groups, H1 2022 saw an interesting change in targets as attackers moved from large hospital systems and payers, big targets that would likely yield the most data but also have more sophisticated defenses, to smaller hospital systems and specialty clinics that lack the same level of security preparedness, staff size, or budget.

Aside from this change in victim focus, attackers this half of the year hit the jackpot, with the Eye Care Leaders EMR breach, which exposed more than 2 million records. This trend of focusing on a systemic technology that is used across most healthcare providers is a trend we anticipate continuing throughout the remainder of 2022.

One thing we’re watching: When we look at which segments of the healthcare ecosystem had Hacking/IT Incident type breaches, we’re now seeing smaller hospital systems and specialty clinics rising to the top. Breaches associated with health plans decreased by 53%, but attacks against business associates jumped by 10% and attacks against providers went up 15%.

“Attackers are continuing to push the envelope and change the playing field when it comes to healthcare data breaches and attacks,” said John Delano, Healthcare Cybersecurity Strategist at Critical Insight and VP at Christus Health.

“This move from large hospital systems and payers to smaller entities that truly have a deficit when it comes to cyber defenses, shows a massive change in victims and approach. As we continue into 2022, we anticipate attackers to continue to focus on these smaller entities for ease of attack, but also for evasion of media attention and escalation with law enforcement.”