Dynatrace announced the results of an independent global survey of 1,303 CIOs and senior cloud and IT operations managers in large organizations, showing that as the move toward cloud-native architectures accelerates, the data generated by such environments outstrips current solutions’ ability to produce meaningful analytics. 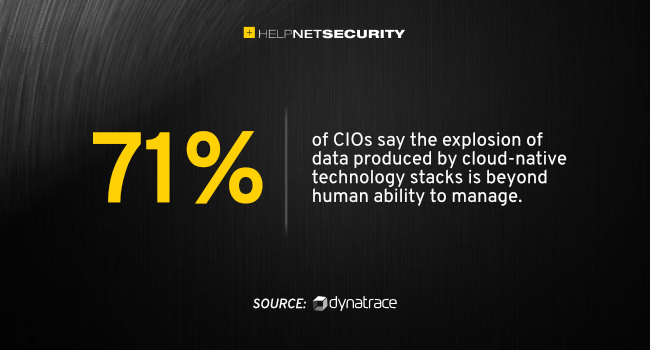 The research reveals the following:

“While organizations benefit from the flexibility and scale that these technologies bring, the explosion of observability and security data they produce is increasingly hard to manage and analyze. Existing tools – and there can be dozens of them – keep data in silos, making it difficult and expensive to unlock insights when organizations need them. As a result, they struggle to achieve the highest standards for security and performance across their digital services.”

Additional findings from the survey include:

“Amidst a sea of data, individual data points are far more valuable when they retain context, which is why teams invest so much effort trying to correlate different streams,” continued Greifeneder. “But today’s manual approaches are too reactive and slow, and they miss the most important insights. Teams urgently need a new approach to observability and security data analytics and management.

“AI and automation should underpin this approach, and it should be capable of unifying all data and keeping its relationships and dependencies intact. This will enable organizations to maximize the value of their data and people, reducing the time spent on mundane manual tasks and enabling faster, more secure innovation.”

The report is based on a global survey of 1,303 CIOs and senior IT practitioners involved in cloud and IT operations management in large enterprises with more than 1,000 employees, conducted by Coleman Parkes and commissioned by Dynatrace. The sample included 200 respondents in the U.S., 100 in Latin America, 603 in Europe, 150 in the Middle East, and 250 in Asia Pacific.