67% of respondents to a recent survey indicated their company had lost a business deal due to the customer’s lack of confidence in their security strategy. 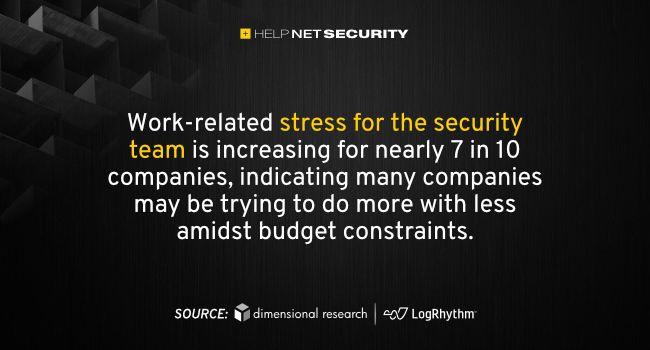 Security is no longer an internal affair

Respondents overwhelmingly indicated that customers and partners are demanding higher standards, highlighting that security has evolved beyond internal consideration. Ninety-one percent reported that their company’s security strategy and practices must now align to customers’ security policies and standards. Partners also exert a new level of due diligence with 85% of respondents stating their company must provide proof of meeting partners’ security requirements.

While a LogRhythm report in 2020 revealed significant misalignment between executives and their security teams with 43% of respondents saying they received enough executive support, the latest research found support nearly doubled over the last two years. 83% of respondents said they now receive enough support around budget, strategic vision and buy-in, suggesting an improvement in understanding between executive leadership and their security teams.

“Given the increasing complexity and severity of cyber threats organizations are experiencing, cybersecurity is now a business imperative,” said Andrew Hollister, CSO of LogRhythm. “Security events hold the potential to significantly impact revenue, which begs the attention of executive leadership and pushes more organizations to align on expectations both internally and externally.”

Security teams are feeling the effects of turnover

When asked if employee turnover reduces the effectiveness of their security teams, the overwhelming majority agreed regardless of their role with 77% of executives, 70% of directors and managers and 58% of security team members agreeing this has impact.

The research also found work-related stress for the security team is increasing for nearly 7 in 10 companies, with 30% reporting a significant increase, indicating many companies may be trying to do more with less amidst budget constraints.

The leading stressors for security team members include growing attack sophistication, more responsibilities and increasing attack frequency. When asked what would help alleviate their stress, the top responses included: