The removal of administrator rights from Windows users is a mitigating factor in 75 percent of Critical Windows 7 vulnerabilities. 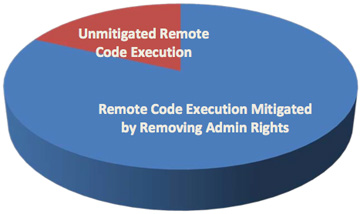 The results of BeyondTrust research demonstrate that as companies migrate to Windows 7 they’ll need to implement a desktop Privileged Identity Management solution, to reduce the risks from unpatched Microsoft vulnerabilities without inhibiting their users’ ability to operative effectively. 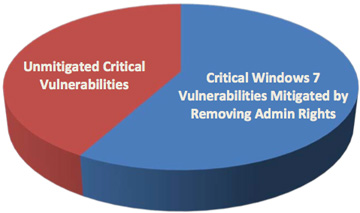 Key findings from this report show that removing administrator rights will better protect companies against the exploitation of:

Peter Beauregard, director of program management for BeyondTrust comments for Help Net Security: “While the percentage of vulnerabilities mitigated by removing admin rights has dropped, the BeyondTrust survey does reveal an increase in overall vulnerabilities. Over the past five years, Microsoft has steadily improved operating system security, culminating in Windows 7, Microsoft’s most secure operating system ever.”

“Unfortunately, all platforms suffer from security vulnerabilities and as indicated by the recent Android issues, the more popular you are the more people are looking to find and exploit vulnerabilities. We expect Microsoft to continue to make progress but companies will still need to manage patches, keep up to date with their virus definitions and remove administrative privileges from their users,” he added.

To learn more about patching challenges and techniques read our interview with Qualys CTO Wolfgang Kandek, where he offers his extensive knowledge on the subject.