Online Chinese third party app stores are a treasure trove of Android malware which hides under many guises.

Their goal is often the same: get permission from the user to send and receive text messages so that the app can subscribe him to premium number services, and to collect his device’s IMSI (International Mobile Subscriber Identity) number and send it out to a remote server.

Trend Micro researchers have recently spotted a number of these malicious applications that took the form of an ebook reader, a location tracker and of a love test application – all requesting permissions that should be suspicious to users: 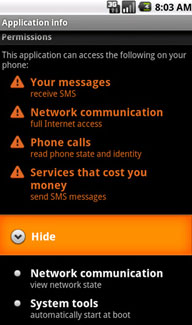 They are often taken down by the online stores pretty quickly, but it is not enough – the developers of this type of apps are too quick and just put up more. In the end, the best way to avoid such apps is to be extremely discriminating when analyzing the permissions they need to function.