Text messages have largely replaced seasonal (and non) greeting cards, and there are mobile apps out there that let you send prewritten witty/sweet messages to friends and family.

But there are also some that pretend to do that, and F-Secure researchers have recently spotted a Trojan targeting Chinese Android users that masquerades as just that type of app. 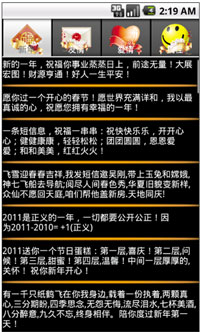 Dubbed AdBoo, the app seemingly lets users choose a message template (jokes, New Year wishes, and more), then asks them to choose the contact to whom it will be sent. But it doesn’t actually send the message – a dialog box notifying them of a “Sending Fail” pops up instead.

In the background, the Trojan harvests information such as phone model and number, Android version and IMEI number and sends it to a remote server.

It is also interesting to note that the researchers believe that the developer of this app is also the one that developed another recently spotted Android Trojan that sends SMS messages to premium-rate numbers, as both pieces of malware are signed with the same certificate.