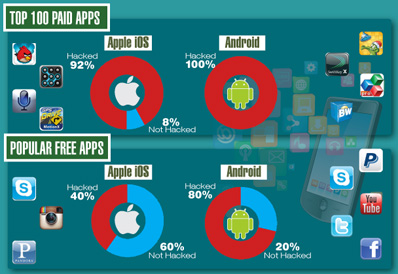 They revealed the widespread prevalence of “cracked” mobile apps and the financial impact befalling the multi-billion dollar App Economy due to compromised brands, lost revenues, IP theft, and piracy.

The proliferation of mobile devices has created an app-centric global marketplace, ushering in the App Economy that is driving new business models and revenue streams across all industries. Arxan set out to analyze the extent of malicious mobile app hacking by researching hacked versions of top Apple iOS and Android apps from third-party sites outside of the Apple App Store and Google Play marketplaces.

Free apps are not immune from hackers: 40% of popular free iOS apps and 80 percent of the same Android apps were found to have been hacked.

Hacking is pervasive across all categories of mobile apps: Hacked versions of mobile apps were found across all key industries such as games, business, productivity, financial services, social networking, entertainment, communication, and healthcare.

The Anatomy of an App Hack entails three steps: Define the exploit and attack targets; reverse-engineer the code; and tamper with the code; this process is made easy with widely available free or low-cost hacking tools.

Financial risks from hacking are increasing rapidly: Mobile app hacking is becoming a major economic issue with consumer and enterprise mobile app revenues growing to more than $60 billion by 2016 and mobile payments volume exceeding $1 trillion (based on data from KPMG, ABI Research, and TechNavio).

“We envision a thriving App Economy with freedom and confidence to innovate and distribute new apps. However, this potential is being threatened by hackers, and most enterprises, security teams, and app developers are not prepared for these attacks,” said Jukka Alanen, VP at Arxan.

“The integrity of mobile apps can be easily compromised through new tampering/reverse-engineering attack vectors. The traditional approaches to application security such as secure software development practices and vulnerability scanning cannot address the new hacking patterns that we identified. The findings call for new approaches for mobile app owners to build protections directly inside their apps to withstand these new attacks,” he added.

“As consumer devices such as iPhones and iPads proliferate in the enterprise and among consumers, the number of organizations interested in custom development of mobile applications is steadily on the rise. We’ve already seen mobile apps take off in the financial sector, with online banking, check cashing, and online trading apps. Security, although a prime driver for custom development, is one of the hardest aspects to get right,” wrote Chenxi Wang, Ph.D., vice president and principal analyst at Forrester Research, Inc., in the June 2011 research report, Building Secure iPhone and iPad Apps.