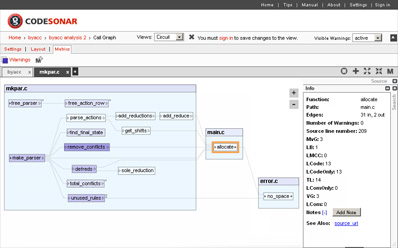 This release is the first version to incorporate CodeSonar’s software architecture visualization, which provides developers with insight into the relationships between elements in software and scales to large projects with millions of lines of source code.

Fluid transitions allow developers to visualize massive data sets in real time and to see the program at different levels of abstraction. CodeSonar visualization also includes other program-understanding and navigation features, and supports annotations and sharing of diagrams between team members.

“Improvements to the analysis engine empower developers to pinpoint defects faster and with greater precision,” said Paul Anderson, VP of Engineering at GrammaTech. “Improvements to the user interface make it easy for developers to understand and analyze very large projects, including those developed by complex software-development organizations.”