The popularity of Rovio’s Angry Birds game and its expansion packs are a guarantee for the success of their newly released Bad Piggies game, but unfortunately for those who would like to play it, it is still available only to iPhone, iPad and Android device owners.

This scenario plays perfectly into the hands of cyber scammers who, due to popular demand, decided to “offer” Chrome users the chance of playing all of these games.

When searching for them in the Chrome web store, users are presented with almost the entire range of Rovio’s games and a few invented titles, but the more perceptive ones can notice that the listed developer is not Rovio, but Playook (www.playook.info).

“A quick glance at the Whois records for playook.info tells us… nothing. They hide their name behind Whoisguard, a very suspicious thing for a business to do,” Barracuda Labs researchers point out.

The second thing that should make users suspicious is that when the move to download any of those apps, they are asked to allow them to access the users’ data on all websites (click on the screenshot to enlarge it): 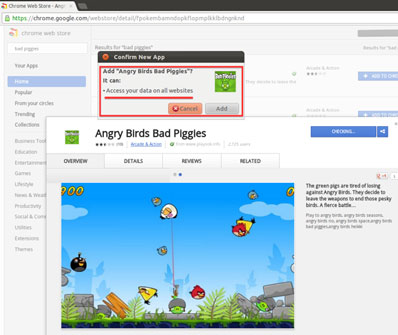 Those users that, in spite all of this, proceed with the installation are saddled with a game that not only is not the wanted one, but that it also (unbeknownst to them) installs a plug-in that will inject additional adds in a slew of popular websites such as yahoo.com, imdb.com, ebay.com, myspace.com, and many, many others.

The scammers behind these plugins obviously get paid for showing these extra ads, and while the links in them can be perfectly harmless, they can also lead to malware and additional scams.

Plugins like these can also lead to the misuse of the occasionally sensitive information that they have been permitted to access.

As always, users are advised to really think about the permissions they give to plugins and apps, and if they don’t seem reasonable, to forego their installation. This advice is worth repeating again and again, as obviously there are always those who don’t know better – as evidenced by the 82,500+ downloads the aforementioned “games” have managed to rack up.