Large-scale financial cybercrime and state-affiliated espionage dominated the security landscape in 2012, according to a new Verizon report. 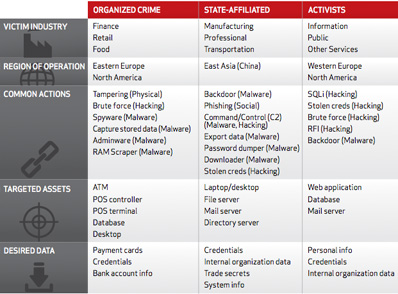 Taking the top spot for all breaches in the 2013 report is financially motived cybercrime (75 percent), with state-affiliated espionage campaigns claiming the No. 2 spot (20 percent). Breaches in the No. 2 spot include cyberthreats aimed at stealing intellectual property – such as classified information, trade secrets and technical resources – to further national and economic interests.

The report also found that the proportion of incidents involving hacktivists – who act out of ideological motivations or even just for fun – held steady; but the amount of data stolen decreased, as many hacktivists shifted to other methods such as distributed denial of service (DDoS) attacks. These attacks, aimed at paralyzing or disrupting systems, also have significant costs because they impair business and operations.

“The bottom line is that unfortunately, no organization is immune to a data breach in this day and age,” said Wade Baker, principal author of the Data Breach Investigations Report series. “We have the tools today to combat cybercrime, but it’s really all about selecting the right ones and using them in the right way.

External attacks remain largely responsible for data breaches, with 92 percent of them attributable to outsiders and 14 percent committed by insiders. This category includes organized crime, activist groups, former employees, lone hackers and even organizations sponsored by foreign governments. As in the prior year’s report, business partners were responsible for about 1 percent of data breaches.

In terms of attack methods, hacking is the No. 1 way breaches occur. In fact, hacking was a factor in 52 percent of data breaches. Seventy-six percent of network intrusions exploited weak or stolen credentials (user name/password); 40 percent incorporated malware (malicious software, script or code used to compromise information); 35 percent involved physical attacks (such as ATM skimming); and 29 percent leveraged social tactics (such as phishing).

The proportion of breaches incorporating social tactics such as phishing was four times higher in 2012, which, according to the breach report, is directly related to the tactic’s widespread use in targeted espionage campaigns.

Additionally, the compromise-to-discovery timeline continues to be measured in months and even years, as opposed to hours and days. Finally, third parties continue to detect the majority of breaches (69 percent).

“With more than a three-fold increase in data contributors this year, the ‘2013 Data Breach Investigations Report’ offers what we believe is the most comprehensive look ever into the state of cybersecurity,” said David Small , chief platform officer for Verizon Enterprise Solutions. “As always, our goal in producing the report is to increase the awareness of global cybercrime in an effort to improve the security industry’s ability to fight it, while helping government agencies and private sector organizations develop their own tailored security plans.”